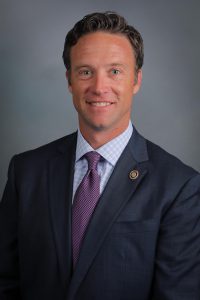 Senator Lincoln Hough was first elected to the Missouri House of Representatives in 2010, where he served three terms. He served as Greene County Commissioner from 2016 to 2018. In November 2018, he was elected to represent the 30th District in the Missouri Senate.

Senator Hough is a graduate of Missouri State University with a B.S. in Political Science. He also owns and operates a family cattle ranch, which he started more than 20 years ago. Senator Hough is a former member of the State Board of Missouri Cattleman’s Association and a current board member of the Greene County Farm Bureau. For the past several years, Sen. Hough has also enjoyed serving as a volunteer for the Springfield chapter of Big Brothers/Big Sisters. Senator Hough also brings experience from his service as a member of the Missouri House of Representatives and his leadership on Transportation and Budget Committees.