Sen. Sandy Crawford’s Capitol Report for the Week of May 24 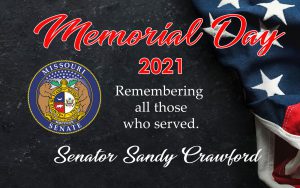 Lawmakers passed several measures during the 2021 legislative session that, I believe, are of benefit to the residents of the 28th Senatorial District:

Senate Bill 2 expands the Missouri Works program to cover projects that support Missouri’s military installations. This was signed into law on April 22.

Senate Bill 26 prevents the Missouri Department of Conservation from installing surveillance cameras on private property, unless there is a warrant; the property owner gives permission; or the agency’s chief law enforcement officer approves it.

House Bill 271 limits local governments’ ability to issue health orders that would close or limit access to businesses, schools or churches. These orders cannot run longer than 30 days in a 180-day period, and may only be extended after a majority vote of the political subdivision’s government body. This would also prohibit vaccine passports in Missouri to access transportation services or public accommodations.

I hope you will take time this Memorial Day to remember those who paid the ultimate sacrifice for our great nation.