Sen. Sandy Crawford’s Capitol Report for the Week of June 28 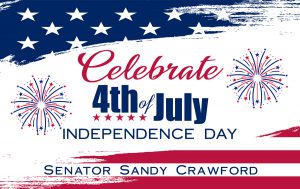 The Missouri Senate met during the extra session and sent Senate Bill 1 to the Missouri House of Representatives on June 26. This measure extends the Federal Reimbursement Allowance, or FRA, for Missouri hospitals. Having this extension was critical for starting Fiscal Year 2022 on July 1; otherwise, the governor would had to have made millions of dollars in withholds. I am pleased to report that the bill has been truly agreed to and finally passed.

We, as Americans, should never forget why we have our freedoms and how they were won. Today, there are still those who are willing to give everything for their country. These brave men and women remind us that the liberties we often take for granted are valuable and worth fighting for. We are not perfect, but we enjoy more freedoms than any other nation because of the bravery and courage of the 56 men who took a stand against oppression and tyranny. Happy 245th birthday, America, may it just be one of many more to come.