This week in the Missouri Senate was quite busy, both with committee hearings and debate on the Senate floor.

Committee action early in the week included the presentation of my bill, Senate Bill 804, to the Senate Committee on Seniors, Families & Children. Senate Bill 804 is similar to Congresswoman Ann Wagner’s SAVE Act and is aided at fighting human trafficking.

The problem in Missouri is substantial. According to the Department of Justice, St. Louis is one of the top 20 human trafficking jurisdictions in the country. Covering House, a Missouri refuge for victims, reported being contacted over 20 times in the past year about victims as young as 12, including one who had been trafficked since the age of 6.

Not surprisingly, promotion of human sex trafficking has moved to the Internet. It is estimated that it generates $45 million for advertisers alone. It’s time that we stop this practice in Missouri. We came close to passing this legislation last session; I am hopeful that we can get the bill across the finish line this year.

This week the same Senate committee passed Senate Bill 644, a bill I sponsored and have mentioned in previous columns, which would require yearly inspections of abortion clinics, require doctors to have both admitting and surgical privileges and requires that all tissue be sent to a pathologist. The bill now moves to the Senate floor for consideration by the full Senate.

Committees also heard bills that would allow adult concealed carry permit holders to possess firearms at institutions of higher education.  Another bill would expand telehealth services statewide, and another bill that would provide transparency in health care by allowing doctors, hospitals and other health care providers to disclose to their patients the contractual “allowable” amount for which they may be responsible. The latter bill is designed to give consumers more flexibility in determining which providers they would like to use based on costs.

Action on the Senate Floor

The Senate also spent time in debate on the Senate floor on bills pertaining to municipal ordinance violations and a resolution regarding the State Tax Commission’s regulation on tax assessments for agricultural property.

This week also marked the annual State of the Judiciary speech given each year by the Chief Justice of the Missouri Supreme Court.  Justice Patricia Breckenridge addressed members of the House and Senate, where she touched on the events in Ferguson, and how those events led to an awareness of concerns with municipal courts that the Legislature addressed last Session. She also touched on improving technology throughout the judicial system and the success of drug courts.  Interestingly, she left unmentioned the surge of crime in St. Louis and Kansas City in the last couple of years.

You can read the full address by clicking on this link: https://www.courts.mo.gov/page.jsp?id=96693

In terms of district-specific issues, I’ve heard from many of you about your concerns regarding the safety of our local roadways, including Highway 61, following the deadly crash that occurred there. I care deeply about the safety of all those traveling in the area and will work with MoDOT to push for additional safety barriers in the area.

Finally, thank you to the many constituents and visitors who took the time to stop by and visit. I always enjoy meeting with constituents from the district.

It looks as though this weather will bring a break from the usual winter cold. I hope you enjoy the sun and pleasant time with your families.

As always, thank you for your interest in our work at the Capitol. I look forward to sharing some of the big ideas moving through the legislature with you in my column next week.  Always feel free to contact my office about any of the issues mentioned in this report, or any other issues that concern you.  It is an honor and a privilege to serve you in the State Senate.

Capitol Visitors: I always enjoy welcoming visitors to my office, most especially constituents from my district. 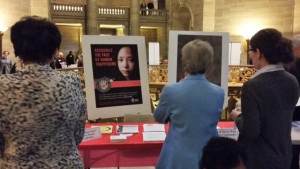 Throughout this session, I will do my best to keep you informed of our work here in the Capitol. I encourage you to contact my office if you have comments, questions or concerns.

For constituent questions, scheduling and general questions, please contact my Scheduler and Director of Constituent Services Theckla Spainhower at Theckla.Spainhower@senate.mo.gov.

For questions pertaining to legislation, please contact my Chief of Staff and Legislative Director Jennae Neustadt at Jennae.Neustadt@senate.mo.gov.

I would like to encourage you to sign up for my weekly capitol reports so we can inform you of our work each week. Please email Theckla Spainhower at Theckla.Spainhower@senate.mo.gov to be added to our mailing list.

Thank you again for your support. I look forward to serving you.