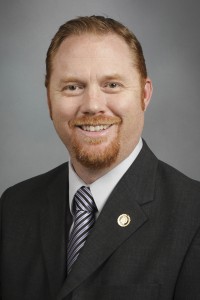 Sworn into office on Wednesday, Jan. 9, 2013 to represent a portion of the Kansas City area, Sen. Jason R. Holsman serves the 7th Senatorial District of Missouri, which is located on the western edge and southwest corner of Jackson County.

A graduate of the University of Kansas, Sen. Holsman earned Bachelor of Arts degrees in Political Science and U.S. History. After gaining his Masters of Arts degree in Diplomacy and Military Science in 2003, Sen. Holsman, dedicated to the field of education, became a social studies instructor for the Kansas City Missouri School District. Senator Holsman made his mark by teaching several subjects, coaching varsity athletics, and serving as Chair of the Principal’s Advisory Committee, among other responsibilities.

Before embarking on a career in the Missouri Senate, Sen. Holsman was a member of the Missouri House of Representatives. In that chamber, Sen. Holsman served as chair of the Committee on Renewable Energy, as well as the Joint Committee on Urban Agriculture, in which he fought for environmental awareness in Missouri. He also sponsored multiple pieces of legislation promoting a sustainable economy through energy independence and food security.

In the Missouri Senate, Sen. Holsman serves on numerous legislative committees, including the Agriculture, Food Production and Outdoor Resources Committee; the Appropriations Committee; the Education Committee; the Rules, Joint Rules, Resolutions and Ethics Committee; and the Jobs Economic Development and Local Government Committee.

Senator Holsman currently resides in the Fox Croft neighborhood of Kansas City with his wife and two children.