During his tenure in the Missouri Legislature, Sen. Dempsey helped steer Missouri in a positive direction. Under his leadership in the Senate, the Legislature passed the first income tax cut in 90 years. After repeated attempts, the Senate fixed an insolvent Second Injury Fund providing stability to those who create jobs while giving relief to thousands of workers who were injured on the job.

“It is a great honor today to be recognized by my former colleagues. I have been blessed in more ways than I can count, and I leave owing a great debt of gratitude to my neighbors who allowed me to serve. I am happy today to share this great tribute with my family,” said former President Pro Tem Tom Dempsey, R-St. Charles.

Former Pro Tem Dempsey’s portrait will be on display in the Hall of the Senate President Pro Tem. On May 11, 1989, the Senate established the hall located along the South wall of the Pershing Gallery. The display pays tribute to the former officers of the Senate for their outstanding service to the great state of Missouri. Many of the senators featured on this wall debated measures and ideas on the Senate Chamber floor, some that have changed Missouri forever and moved our great state forward.

“Former Sen. Dempsey has been an inspiration to us all, and it’s my great pleasure to honor him and his family by unveiling his portrait for all Missourians to see,” said Senate Leader Ron Richard, R-Joplin. 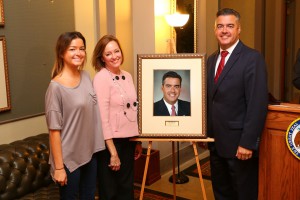