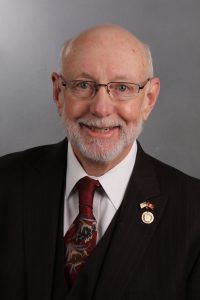 Senator Bill White was elected to serve the people of the 32nd Senatorial District, covering Jasper, Dade and Newton counties, in November 2018. He was first elected to the General Assembly in November 2010, where he represented the Joplin area in the Missouri House of Representatives for eight years.

Prior to his legislative duties, White practiced law in Joplin focusing on children, seniors and business law. He previously served as the attorney for the Jasper County juvenile office for juvenile neglect, delinquency and abuse cases. He has also volunteered as a political and social sciences teacher for McAuley Catholic School and as a science teacher for Martin Luther School in Joplin. In addition, White has held multiple volunteer positions with the Boy Scouts of America, including scout master, shooting sports director and district chairman. He has also served as the president of the Joplin swim team and president of the Tri-State swim conference and as a member of the City of Joplin Parks and Recreation Advisory Board, as well as other community boards.

Before completing law school, White worked for Commonwealth Edison as a senior systems analyst, developing software for the construction of nuclear power plants.

He served in the Marine Corps from 1973-1976, where he worked as an air traffic controller.

White is a member of several local Chambers of Commerce, the American Legion, the Missouri Bar, the NRA, the Marine Corps League and the Naval Institute. He resides in Joplin with his wife of 46 years, Dr. Ellen Nichols. They have four children, Jesse White, Brandyn Lessman, Amanda Stinson and Jera White, and three grandchildren, Tymber, Carson and Rocky.