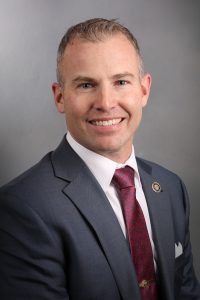 Senator Rick Brattin was elected in 2020 to represent Missouri’s 31st Senatorial District. He is a former auditor of Cass County and previously served four terms in the Missouri House of Representatives, from 2010-2018, representing the 55th District in Cass County. During his time in the House, Sen. Brattin served as majority floor whip, chaired the Special Committee on Government Oversight and was the senior member of both the Local Government and the Veterans committees.

Senator Brattin is a native of Cass County, growing up in Greenwood. He graduated from Lee’s Summit High School and then joined the United States Marine Corps, where he served for six years as a non-commissioned officer. Senator Brattin has owned and operated a small construction company for 14 years and maintains a 40-acre farm in central Cass County, north of Harrisonville.

Senator Brattin and his wife, Athena, reside in Harrisonville with their five amazing children: Mariah, Kayla, Rick, Garrett and Hannah. He and his family are devoted Christians and members of Abundant Life Church in Lee’s Summit. Senator Brattin is active in several groups and organizations across the 31st Senatorial District. In his free time, Sen. Brattin enjoys being involved in his childrens’ sporting events, working around his farm, hunting and enjoying Missouri’s wildlife.