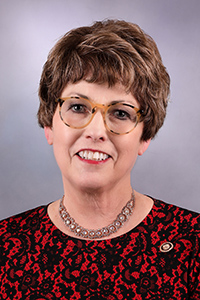 Senator Cindy O’Laughlin was elected in 2018 and again in 2022 to represent the northeastern counties of the 18th Senatorial District. In 2022, she was elected by her peers to serve as the Majority Floor Leader, the first female to hold this office in Missouri Senate history.

In addition to her public service, Sen. O’Laughlin has served as vice president of Leo O’Laughlin, Inc., for the past 26 years. The senator and her husband own and operate a trucking company and ready mix concrete business with locations in Shelbina, Macon, Marceline and LaBelle.

Prior to being elected to the Missouri Senate, Sen. O’Laughlin served as a school bus driver, an administrator at a local Christian school and as a member of her local school board. She previously served as chair of the Senate Education Committee and remains a strong advocate for improving educational outcomes for all Missouri children.

Senator O’Laughlin has been a member of various civic organizations, such as the Shelby County Chamber of Commerce & Industry and the Shelby County Economic Development Board. She has also served on numerous statewide boards, such as the Associated Builders and Contractors and the Missouri Club for Growth. Senator O’Laughlin is currently a member of the National Rifle Association, Missouri Cattlemen, the Missouri Farm Bureau and Macon First Baptist Church.

Senator O’Laughlin grew up on a farm and spent much of her childhood around horses, livestock auctions and corn fields. Today, she’s the proud owner of several dogs, including Basset Hounds, as well as several rescue dogs.

A current resident of Shelbina, Sen. O’Laughlin has four sons, a foster daughter and six grandchildren. She is a 1978 graduate of the University of Missouri.