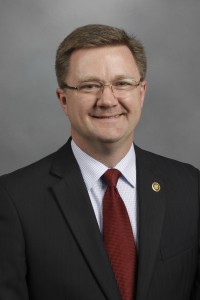 In 2010, Senator Bob Dixon was elected by the people of Greene County to represent them in the Missouri Senate, where he provides a strong voice for the district.  Living in Springfield, where Dixon and his wife Amanda have raised their three children, he understands the needs of the area and reflects the values of its residents.

Dixon’s reputation as a hardworking, effective legislator has earned him key committee appointments during his time in the Senate, where a southwest Missouri tradition of independent thinking continues to drive his legislative work.   In his first year, he was immediately selected for a spot on the important Judiciary and Civil & Criminal Jurisprudence Committee.  Halfway into his first term, Dixon was chosen as chair of the Judiciary Committee.  He is only the third non-attorney to have served in this position during the committee’s 193-year history, and the first since the 1830s.

Dixon’s other committee assignments provide him valuable opportunities to address the needs of the 30th District and the interests of Missourians throughout the state.  As a member, and past vice-chair, of the Jobs, Economic Development and Local Government Committee, he works to secure existing jobs and create new ones for Missourians.  He also supports the interests of Greene County and the greater Springfield area as a member of the Rules, Joint Rules, Resolutions, & Ethics Committee; the Transportation, Infrastructure, & Public Safety Committee; and the Ways & Means Committee.

Senator Dixon first entered public service in 2002, when the people of the 140th District elected him to represent them in the Missouri House of Representatives.    On January 8, 2003, he was sworn in as a member of the historic 92nd General Assembly.  Voters returned him to the House three more times between 2003 and 2010 to serve as their representative.  Twice, his colleagues elected him to a leadership position as Majority Caucus Chairman (2004-2008).  During his final term in the House, Dixon served as chair of the Transportation Committee (2009-2010).  Eight years after he first entered the legislature, Greene County voters elected him to continue his service in the upper chamber.

In addition to his legislative duties, Dixon is an adjunct instructor in Drury University’s Leadership Studies Program.  His career in the private sector includes more than twenty years of experience in banking and financial services.

Guided by certain basic principles, Dixon has worked for a state government that secures for Missourians the opportunity to freely exercise their rights, earn an honest living and enjoy the gains of their own industry.  He also supports a government that works for Missourians, not against them, one that practices fiscal responsibility and encourages free enterprise.

His legislative priorities have centered on quality jobs, effective justice, and good government.  Growing a solid economy with secure jobs depends on encouraging new investment and supporting small business owners and entrepreneurs.  Dixon has sought to tear down barriers that discourage innovation, investment and expansion. Quality educational opportunities are a keystone for secure jobs and economic development.  Dixon has worked to improve our public education system and hold the line on education funding.  He has also demonstrated an unwavering commitment to keeping families and children safe at school and home with crime prevention and public safety measures, particularly legislation to deal justly with those who abuse children.

A free society also depends on effective justice, which requires a justice system equipped and prepared to meet the challenges of the 21st Century.  Dixon has long been recognized for his efforts to improve Missouri’s justice system. As Judiciary chair, he has focused on certain core priorities:  improving the administration of justice, providing greater access to justice, and promoting public safety.  Knowing the importance of a clear, concise and updated criminal code to a strong, effective criminal justice system, public safety, and the wise use of taxpayer dollars, Dixon was instrumental in successful legislative passage of the Missouri Revised Criminal Code in 2014.  The Revised Code is the first comprehensive update of the state’s criminal laws since the original Criminal Code was enacted in the late 1970s.

Among Senator Dixon’s legislative accomplishments are:

Community/State Organizations (past and present):

National Organizations (past and present):