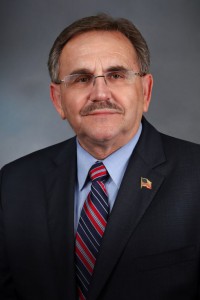 Born and raised in Greenville, Mo., by his parents, Clyde and Marglie Libla, Sen. Doug Libla earned his early education through Greenville-R2 schools and graduated from Greenville High School in 1970. Sen. Libla moved to Poplar Bluff in 1971 and attended Three Rivers College from 1971-73. During this time, he married his wife, Elaine Duncan, in 1972 in Williamsville, Mo. They now have one daughter, a son-in-law, and three grandchildren.

Senator Libla began his business career on the corner of North Main & Davis Street in Poplar Bluff on June 9, 1971, as owner and operator of Doug’s Sinclair & Tire, where he earned a living pumping gas, changing oil, fixing flat tires, and washing and repairing cars.

Along with his brother, David, Sen. Libla began a successful partnership in 1977 by entering a joint business venture that led to the creation of a number of successful companies. With a strong work ethic and family values instilled in them by their parents, Sen. Libla and his brother garnered much success, which allowed him to bring to the Legislature his broad business experience in manufacturing, trucking, telecommunications, heavy construction, automotive products, industrial supplies, and commercial and industrial real estate.

The family flagship company, Mid Continent Nail Corporation, located in the Poplar Bluff Industrial Park, is a culmination of his life’s work. Since 1987, his family’s brand “Magnum Fasteners” has gained recognition throughout the nation as the premier quality nail manufacture serving numerous industrial and construction industries. Sen. Libla retired from the company in February 2012.

Sen. Libla took his commitment to improving the quality of life for the citizens of southeast Missouri, as well as what he learned while obtaining his life’s dreams, and applied these values when he ran for office in 2012, winning the 25th District seat in the Missouri Senate.

Sen. Libla is actively involved in a number of community activities, including serving on the board of the Fellowship of Christian Athletes (FCA), Three Rivers College Endowment Trust, as well as serving as past President/Charter Member/and current Troop E Director of “THE MASTERS” (Missouri Association of State Troopers Emergency Relief Society).

In addition to his work in the community, Sen. Libla and his wife Elaine are dedicated to making a difference in the lives of others by actively working with and supporting the Baptist Children’s Home, Boys and Girls Club of Poplar Bluff, Haven House, Ozark Family Resource Center and Southeast Missouri FCA, as well as many other charities and organizations.

Sen. Libla and his wife are also long-time members of the First Baptist Church in Poplar Bluff, where they call home.

Legislative Service:
Elected to the Senate: 2012