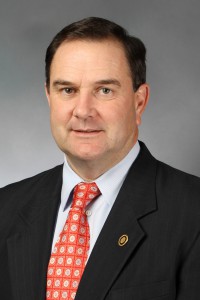 Mike Kehoe was born in St. Louis on Jan. 17, 1962. The youngest of six children, Mike was raised by a single parent – his mother. At the age of 15, he started washing cars for Dave Sinclair Ford, and worked his way up into sales management by his early 20s. When he was 25, Mike was given an opportunity to lead Osage Industries in Linn, Missouri. During his time in Linn, he grew the employment from 25 to 60, and expanded product distribution from just two states to all of North America. In 1992, Mike sold Osage Industries to its employees and purchased the Ford and Lincoln-Mercury franchises, which he owned and operated for 20 years.

Mike has received national recognition and awards throughout his career. In 1991, he received the SBA’s Young Entrepreneur of the Year Award, and in 1996, he was honored by the Automotive Hall of Fame when he received the Young Leader in Excellence Award. In 1998, Mike was elected by his peers to serve on Ford Motor Company’s National Dealer Council, and in 2000, he placed in the Top 5 for Time Magazine’s Dealer of the Year Award. Mike was recently presented with the Missouri Electric Cooperatives’ Legislative Leadership Award, as well as the St. Louis Business Journal’s 2011 Legislative Award. Most recently, he was voted “Best Elected Official” by Jefferson City Magazine readers in 2011.

In 2005, Mike was asked by Gov. Blunt to serve on Missouri’s Highway and Transportation Commission, and in 2009, was elected to be the chairman. Mike has also served on the MADA Board, the Linn State Technical College Board of Regents, the Jefferson City Chamber of Commerce, the Missouri Chamber of Commerce, the USS Missouri (SSN-780) Commissioning Committee, the Central Missouri United Way, and the Jefferson City Diocese Jubilee Committee.

On Nov. 2, 2010, Mike was elected to the Missouri Senate, representing the citizens of the 6th District, now covering the counties of Cole, Gasconade, Maries, Miller, Moniteau, Morgan and Osage.

Mike and his wife Claudia married in 1989. They have four children – Carol, Michael, Maggie, and Claire. Mike and Claudia are active in the Jefferson City Catholic school system and the Diocese of Jefferson City. The Kehoes are also proud supporters of the United Way, the American Cancer Society, the Heart Association, the Central Missouri 4-H, the Helias Foundation, the Jefferson City Veterans Council, the Boy Scouts, Jefferson City High School, and St. Mary’s Hospital. Outside civic and community activities, the family spends much of their time at their farm on the Gasconade River in Phelps County.