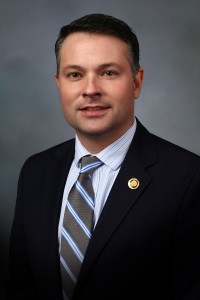 Senator Jake Hummel was elected to the Missouri State Senate in a special election in November 2016. He represents portions of St. Louis City and St. Louis County. Through past legislative experience in the Missouri House of Representatives he has always stood up against harmful anti-labor legislation, worked to better fund Missouri roads and bridges, and improve the economic development in the show-me state.

Prior to being elected as the Senator from the 4th district, he served in the Missouri House of Representatives for 8 years, representing a portion of South St. Louis City (District 81). In 2012 Jake was elected by his colleagues to lead the Democratic Caucus as the House Minority Leader. He continued on as Minority leader until the end of his fourth and final term in 2016. He also serves as the Committeeman for the 11th Ward in St. Louis City.

Currently, Sen. Hummel is the Secretary-Treasurer for the Missouri AFL-CIO. He is a third-generation union member and a 20-year member of the International Brotherhood of Electrical Workers. Senator Hummel is also a founding member of the St. Louis City Labor Club.

​In addition to his legislative and union duties, Sen. Hummel is a member of the Carondelet Community Betterment Federation, Holly Hills Improvement Association, Boulevard Heights Neighborhood Association and the Dutchtown South Community Corporation.

​Sen. Hummel was born in St. Louis and is a 1994 graduate of St. Mary’s Catholic High School. He is a member of Saint Stephen’s Protomartyr Catholic Church. He currently resides in the Holly Hills neighborhood with his wife Sarah and two children.