Welcome to the Hall of Famous Missourians

Welcome to the Hall of Famous Missourians

What do Bob Barker, Scott Joplin and Sacajawea have in common? These three vastly different individuals are all enshrined in the Hall of Famous Missourians. Next month will mark the 40th anniversary of the Hall, a collection of bronze busts that line the perimeter of the Rotunda in the Capitol’s third floor between the House and Senate chambers. The honorees in the Hall are reflective of our state’s ethnic and philosophical diversity, but what they all share in common is their prominence in Missouri’s history and their contributions to our state’s reputation and well-being. These notable Missourians are from all walks of life and include artists, athletes, activists, politicians, inventors, decorated military members and entrepreneurs.

On September 8, 1982, the first bust was placed in the Hall to pay tribute to one of Missouri’s most celebrated sons, Samuel Clemens, who worked under the pseudonym Mark Twain, riverboat jargon for “two fathoms deep.” One of my favorite quotes by Clemens is, “It is better to keep your mouth closed and let people think you are a fool than to open it and remove all doubt.” His novels depicting life on the Mississippi River in the 1830s with relatable, heroic characters, are still taught in American Literature courses around the country and revered by all.

Our community’s native son, George Washington Carver, was the second famous Missourian to be memorialized in the Hall in 1983 for his vast contributions to science and agriculture. The first female was also inducted in 1983, Susan Elizabeth Blow, who established the United States’ first public kindergarten in Des Peres, Missouri, in 1873. By 1883, exactly 100 years before her induction, every public school in St. Louis had a kindergarten, making the city an early childhood education model for the entire nation.

Carver’s bust is joined by three other successful Missourians from our community. Neosho’s world-renowned artist Thomas Hart Benton was added in 1985, and R. Marlin Perkins, born in Jasper County, was added in 2004. Perkins was an ecologist who brought nature and wildlife into Americans’ living rooms via the television show, “Mutual of Omaha’s Wild Kingdom.”

In 2020, I was honored to meet with the staff of the Jasper County Clerk’s office who attended the ceremony for Annie White Baxter. Not only was she the first Missouri woman to be elected to public office in 1890 as the Jasper County Clerk, she was the first female in America to hold the office of county clerk. Her trailblazing accomplishments preceded the 19th Amendment, so she was overseeing elections for which she couldn’t even cast a vote. Visit house.mo.gov/famous.aspx to learn about the other famous Missourians whose bronze busts adorn our Capitol. 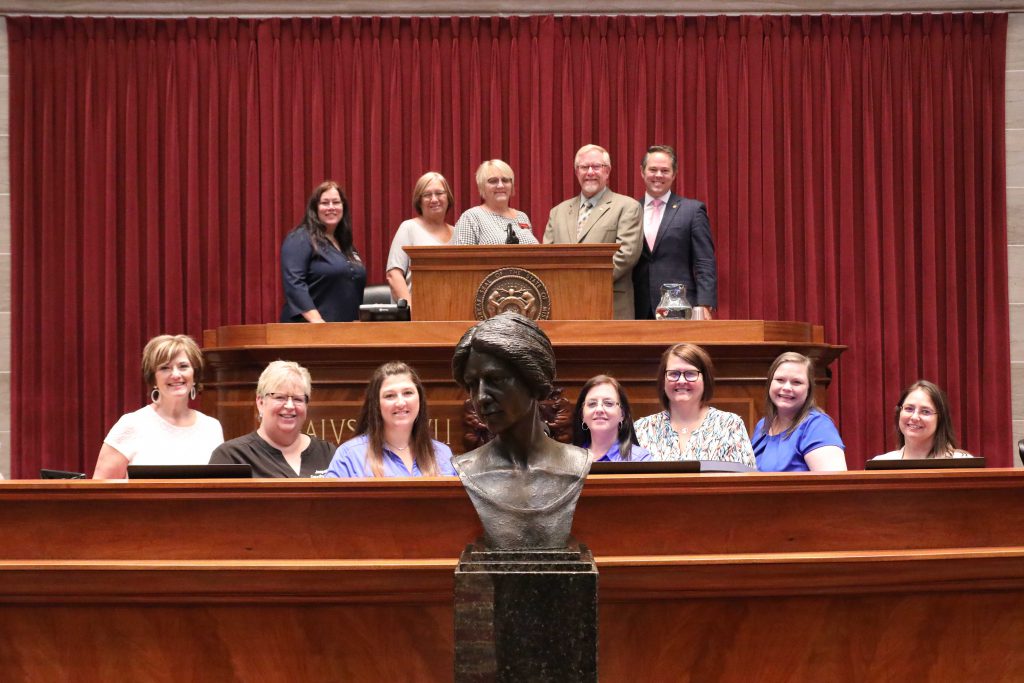 Memorializing high-achieving Missourians with a bronze bust is a tradition of the Missouri House of Representatives, and the Speaker holds the sole authority to induct people into the Hall of Famous Missourians, securing the funding and commissioning the sculptor.

The idea for the Hall was guided by the Missouri Capitol Society, a bipartisan, nonprofit organization charged with providing original artworks for the Capitol. Mark Twain’s bust was the first artwork added to the Capitol in over 50 years. Since the concept wasn’t put into place until 1982, most of the tributes were made posthumously. One exception to that is John Luke Morris, the innovative founder of Bass Pro Shops who was the last person to be inducted in September of 2021 and attended his own revealing ceremony.

Visiting the Hall of Famous Missourians is just one more great reason to plan a road trip to Jefferson City and tour our Capitol. What strikes me the most about these treasured Missourians is that almost all of them came from modest upbringings with scarce opportunities, and yet, they were able to overcome obstacles, defeat, turmoil, and even racism in some instances, by working hard and never giving up. I would say those attributes describe most people from the Show-Me State, famous or not.

This column was featured in the Joplin Globe’s Better Living publication on Aug. 5, 2022.