The Posts of Christmas Past

The Posts of Christmas Past

Ready or not, the holidays are here. Christmas music is playing on the airways, busy shoppers pack stores looking for gifts and families are coming together and recollecting on past celebrations. From an older person’s perspective, this time of year brings back a flood of memories of different stages of our lives, from anticipating the special day as a young child, to playing the role of Santa for my children, to relishing in our grandchildren’s excitement. As we enter this glorious season of hope, peace, love and joy, I would like to share some posts from Christmas past!

These stories center around the military. It’s hard to believe, but this year will mark 80 years since the fabric of our country was forever altered by the bombing of Pearl Harbor on Dec. 7, 1941. Only a small percentage of living Americans remember hearing this message on the radio, “We interrupt this broadcast to bring you an important bulletin from the United Press.” Until then, American citizens and leaders were extremely reluctant to get involved in another European war, but the attack forced our minds to change. The next day, President Roosevelt appeared before a joint session of Congress and declared Dec. 7, 1941, as “a date which will live in infamy.” Congress immediately, and one vote short of unanimously, passed a resolution declaring war on the Empire of Japan. By Dec. 11, Italy and Germany had declared war on the U.S., officially marking the beginning of a four-year struggle, costing more than 400,000 American lives. America wouldn’t witness that kind of devastation on her soil until the terrorist attacks 60 years later on Sept. 11, 2001.

That one hour and 15 minute surprise bombing killed 2,403 people, wounded another 1,178, destroyed two battleships and 169 aircraft, and damaged six other battleships and numerous cruisers, destroyers and other ships. Aside from the devastating carnage and wreckage, this attack quite literally dropped a bomb on our American way of life, dawning a new generation of Americans whose innocence and feelings of invulnerability were forever lost. Those under 90 don’t have a very clear recollection of the catastrophic event, but we remember our parents talking about the effects and loss of “the big one” during holiday gatherings. In retrospect, the bombing of Pearl Harbor that December morning was the first in a long series of atrocities that would transpire and be revealed during WWII.

Fast-forward 32 years to 1973 when I was stationed at the Marine Auxiliary Landing Field in Bogue, North Carolina, for my first Christmas away from home. Although I felt fortunate to still be at a stateside post for the holidays, the Marines in my squad bay were no substitute for my family, my mom’s cooking or my childhood sweetheart, who is now my wife, standing under the mistletoe. Lighted palm trees, damp cool weather and coastal Christmas decorations seemed out of sorts for this young Missouri boy, too. My fellow troops and I survived the holidays by rereading letters from home, sharing the contents of our care packages and creating makeshift Christmas decorations and hokey gifts out of atypical supplies. Since you don’t have holidays off in the military, Christmas began like every other day for those on duty, get up at zero dark thirty, eat at the mess hall and line up in formation for muster call and inspection, a far stretch from what we would have been experiencing at home. It was on that uneventful Christmas day in Bogue that I experienced my first taste of what it’s really like to live “semper fi.”

Although the “always faithful” motto is specific to the Marines, everyone who has faithfully served in the military has spent holidays at a post far from home, bonding with their unit instead of family. What I discovered is that it doesn’t matter if you spend one Christmas or five holidays away, each one presents a new challenge to those who are defending our country. Separation from family may amplify the feeling of loneliness during this time, so please help brighten one of these homesick hero’s holidays by adopting a warrior or military unit. The Department of Defense and numerous military-based nonprofits, such as America’s Adopt a Soldier, Operation We Are Here and Soldiers Angels, offer ways to provide assistance and support for our troops. The Joplin VFW and American Legion can connect you with service people who would benefit from a care package or cards from home. Senior citizens may contribute by volunteering to help with an upcoming community event, coordinating a card drive with an elementary school, checking in with our local veterans who may be spending the holidays alone and countless other ways.

The classic song, “I’ll Be Home for Christmas” will be played on radio stations and in homes repeatedly throughout the next four weeks. I hope when you hear the melody this year, you will be mindful of our troops stationed in posts all over the country and world, who deal with the desire of being home and the reality of “if only in my dreams.” 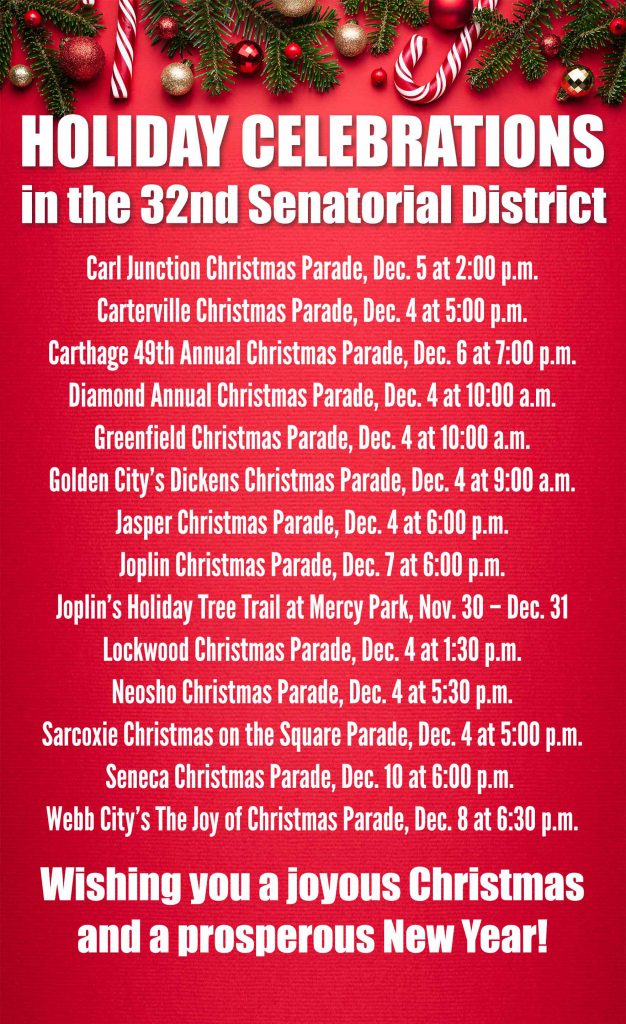 This column appeared in the Joplin Globe’s Better Living publication on Dec. 3, 2021.