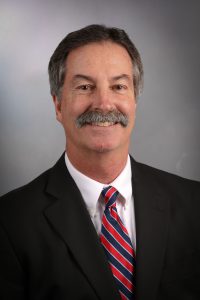 Senator Moon was born in Kannapolis, North Carolina, and graduated from Western Branch High School in Chesapeake, Virginia. After graduation, he attended Baptist Bible College in Springfield, Missouri, where he met his beloved wife of 40 years, Denise. Senator Moon received his bachelor’s degree in secondary education from Southwest Missouri State University in 1985. He and Denise have five children, Amanda, Bryan, Erin, David and Jason, and are the proud grandparents of four beautiful granddaughters and two handsome grandsons.

Senator Moon spent 27 years in marketing for Mercy Hospital and currently raises cattle on his farm in Lawrence County. He is an active member of High Street Baptist Church, where he serves as a deacon, Sunday school teacher and on mission committees. He is also a member of the Springfield-Southeast Rotary Club, and was the proud recipient of the club’s Lend-a-Hand award for outstanding community service.

Prior Legislative Service:
House of Representatives: 2013 - 2020