Missouri’s Constitution requires the Legislature to pass a balanced budget each year. The Senate third read and passed its version of the $45 billion operating budget for Fiscal Year 2023 this week, which includes expenditures of the federal funds Missouri received in response to the pandemic. I’m pleased to report DESE will receive increased funding for school transportation costs, and we fully funded our state’s education foundation formula, the mechanism in place to distribute funds to our K-12 public schools. Our community will also benefit from the $25 million appropriated to the Jefferson County Port Authority. Next week, lawmakers from both chambers will meet to address any differences between both versions of the state’s FY 2023 operating budget. The General Assembly must put its final stamp of approval on the state’s 2023 spending plan by 6 p.m. on May 6.

The 2022 legislative session ends on May 13, so the next two weeks will be a flurry of activity as legislators vie to pass their bills. I’m pleased to report that several of my proposals have advanced as amendments on other bills. Language from my Senate Bill 698, which extends Medicaid coverage for postpartum women to one year, has been added to Senate Bill 823, and my legislation to designate the second full week in March as Pet Breeders Week, Senate Bill 1200, is now a provision of House Bill 2627. I’m hopeful both these bills will cross the finish line before session ends.

Plant a Tree for Prosperity and Posterity

This year marks the 150th anniversary of National Arbor Day, observed on April 29 as a day for individuals and communities to plant and care for trees. Our tree-filled forests are prolific for humans and wildlife alike, and they provide outdoor recreation, shade, erosion prevention and important timber and jobs to help drive our state’s economy. 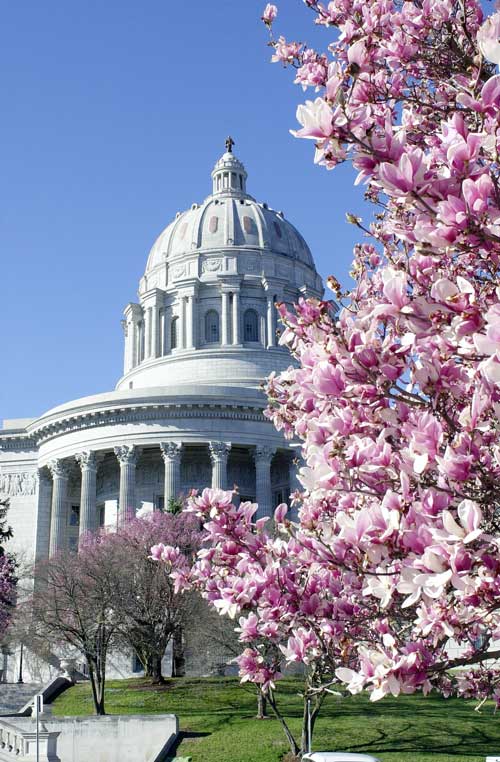 During the 1800s, 70% of Missouri’s terrain was covered by forests, a number that has declined to about 33%. Check the Department of Conservation’s website to find tips for planting and caring for trees, learn about invasive species and access the tree-identifying Field Guide. Plant a tree today for prosperity and posterity tomorrow!

The highlight of my week is always visiting with the members of our community who travel to Jefferson City to participate in the legislative process. While April 28 was the last day I could introduce guests in the chamber, you are always welcome to stop by my office for the remainder of session.

Senator Gannon listens to issues and updates from these community members who traveled to Jefferson City to advocate for those living with developmental disabilities.