Does Any Other Senator Desire to Be Heard?

These eight words, asked periodically by the presiding officer during the Senate’s proceedings, differentiate the dialogues that occur in the upper chamber from the lower, determine whether a bill progresses or stalls, decide the destiny of a bill’s language and guide the orders of business in the Senate chamber. Last week, senators cast their votes on the bills that make up our state’s $35 billion operating budget for Fiscal Year 2022, and this week, they had one more chance to advance their legislative priorities before the session adjourns on May 14.

Legislators file bills for the upcoming session with one goal in mind, to see and hear the words, “Truly Agreed and Finally Passed” (TAFP) attached to their proposal. Two of my bills received this stamp of approval during the final days of session, and one of my priority bills, Senate Bill 120, now awaits the governor’s consideration. The measure, in part, follows recommendations from the U.S. Department of Defense, and pending voter approval, will create the Missouri Department of the National Guard. The bill designates November as Military Family Month and creates the option for Purple Star Campuses within school districts. Additionally, SB 120 grants an interview for any Missouri National Guard members applying for state jobs, adds veteran questions to state forms to help connect them to services and enacts several other provisions. 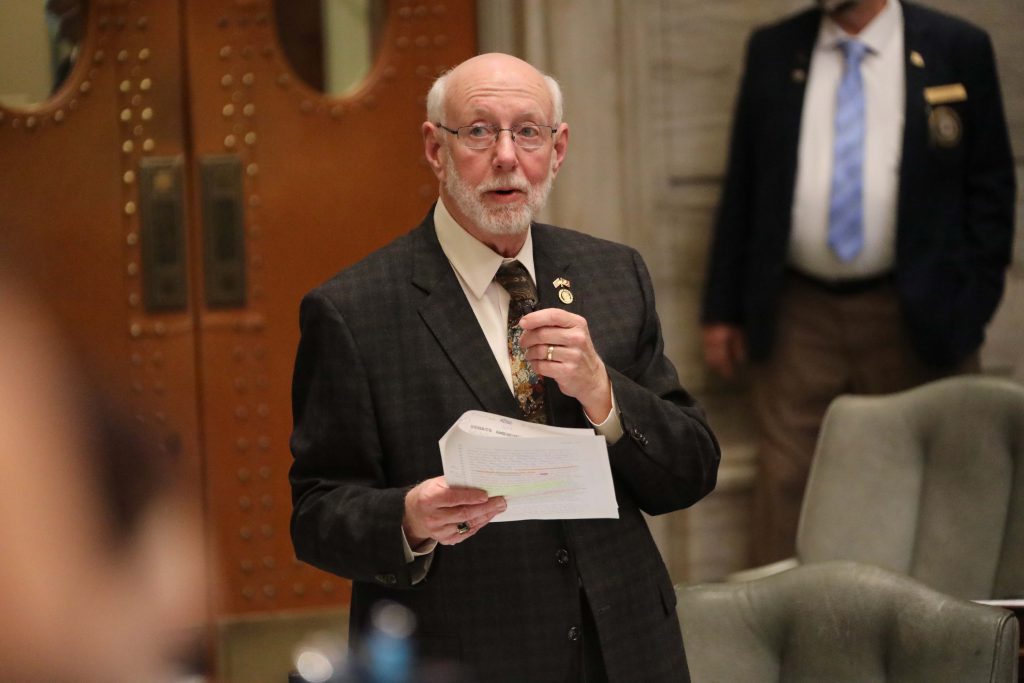 Senator White explains an amendment in the Senate Chamber.

My other military-related bill, Senate Bill 258, crossed the finish line on May 11 and classifies members of the Missouri National Guard as state employees so they may use state vehicles while conducting official business. The folks in Joplin will be pleased to hear the measure was amended in the House to designate our armory as the Sergeant Robert Wayne Crow Jr. Memorial Armory.

A proposal I handled in the Senate, House Bill 557/560, advanced in the upper chamber, and if it passes, will increase regulations and oversight in unlicensed residential care facilities. In addition, my Senate Bill 212 is making headway in the House, and if passed, will make some needed updates within the Department of Corrections.

National Police Week starts May 9 and culminates with National Police Officers Memorial Day on May 15. Established by President Kennedy and Congress in 1962, the week honors the officers who have lost their lives while protecting and serving their communities. Please thank our local law enforcement officers when you see them, both this week and beyond!

Celebrating the Men and Women of the Armed Forces

On May 15, our nation celebrates National Armed Forced Day, a time to commemorate all of our men and women in uniform and show our appreciation for their service. A simple “thank you for your service” is a good place to start, and I think the passage of Senate Bills 120 and 212 will also go far to honor these heroes.

The Kansas City University’s College of Osteopathic Medicine in Joplin held its first graduation ceremony on May 9, adding 131 new physicians to the profession. I was honored to attend and extend my congratulations to these much needed, future doctors. 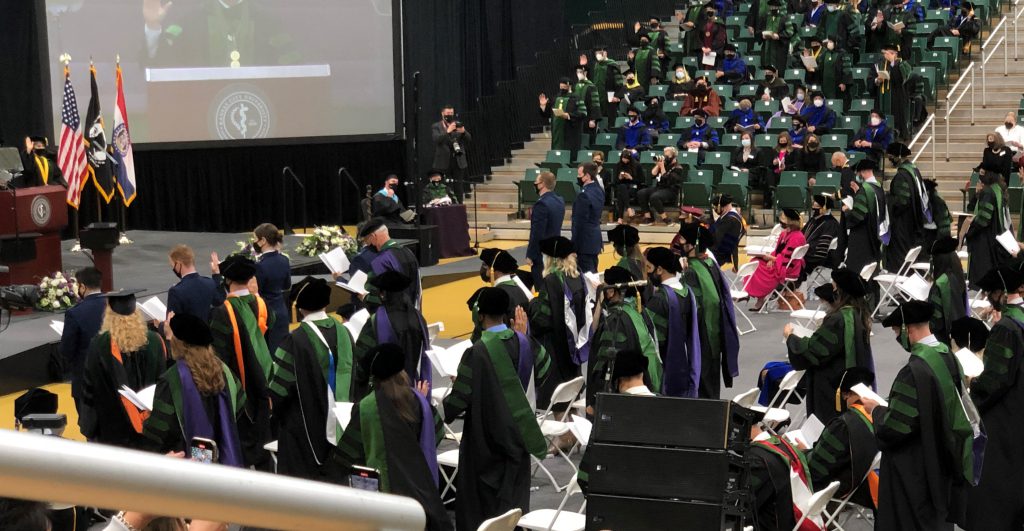 Future physicians take their oath during the KCU-Joplin’s graduation ceremony.

Visitor Sets His Eyes on the Skies

I had the privilege of meeting an outstanding young man from Joplin who aspires to join the Missouri Air National Guard and eventually attend the Air Force Academy in Colorado Springs. Elias Rincker toured the Capitol on May 13 with his father, Jason, attended a Senate debate and later met with Brigadier General Eaves from the Missouri Air National Guard. Fly high, Elias! 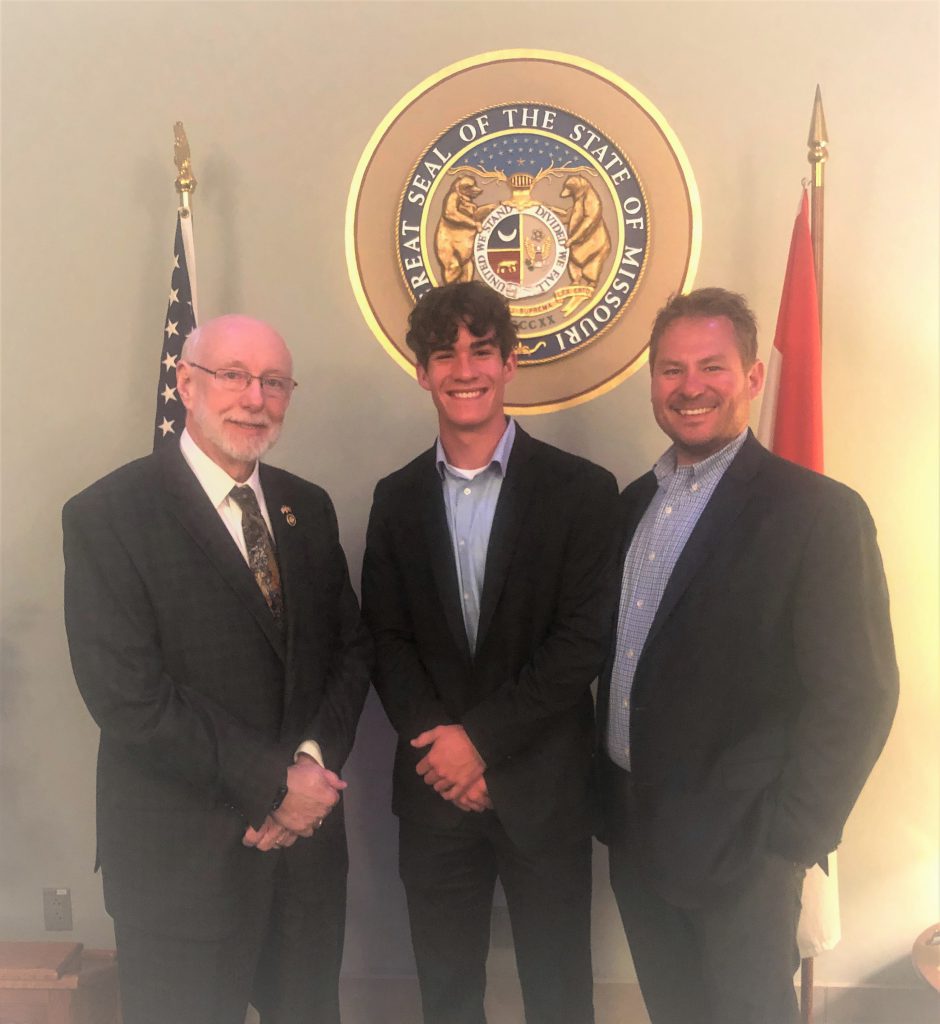 Senator White, Elias and Jason Rincker pose for this photo during their visit on May 13.

Congratulations to Laurea Patterson, a high school science teacher from the Diamond R-IV School District, who secured a $5,000 “Fund My Classroom” grant from Western Governors University (WGU)-Missouri. Ms. Patterson will use the funds to create a hands-on, interactive outdoor classroom for students to learn about ecology and botany. She received her check from WGU staff in a surprise presentation on May 6 during the observance of National Teacher Appreciation Week. 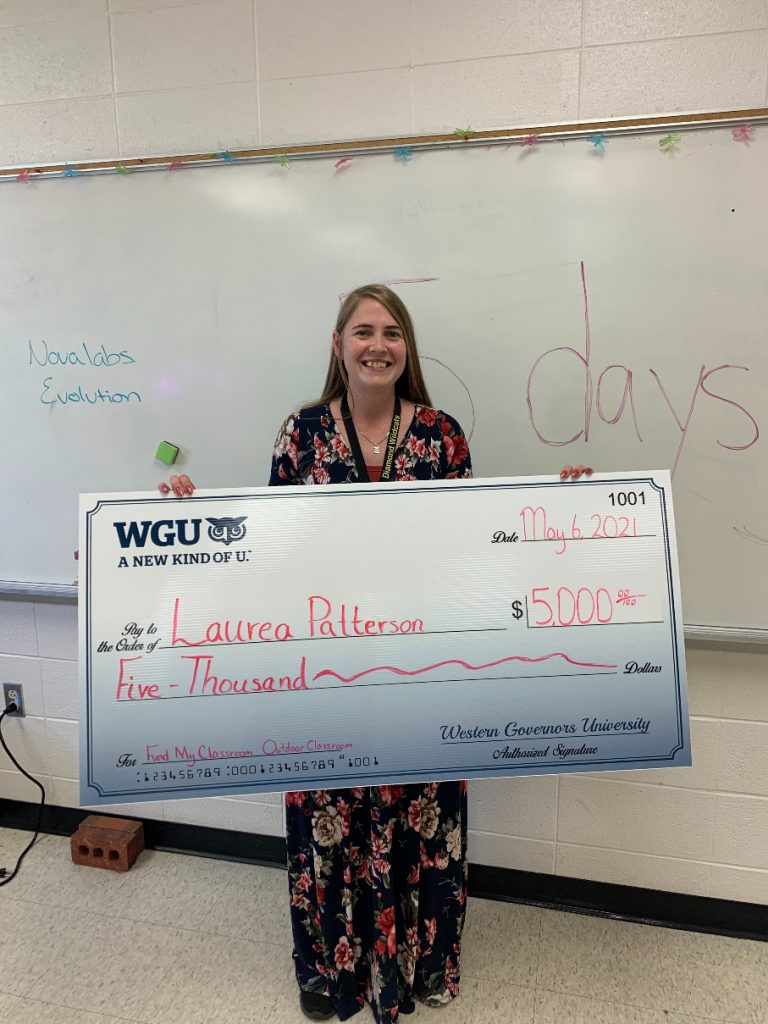 Laurea Patterson holds the $5,000 check she received from WGU for the “Fund My Classroom” grant.

Next weekend, our community will commemorate the deadly EF5 tornado that demolished buildings and transformed portions of our community into a mile-wide trail of debris on May 22, 2011. What sticks out most in my mind is not the mass devastation, but rather, the courage, camaraderie, unity and resilience of our community. I thank everyone who helped clean-up, move patients, relocate school students, console neighbors, restore hope and rebuild our beautiful city. Be sure to show your appreciation, too, by participating in the numerous events commemorating the 10 year anniversary of the tornado, including the Joplin Memorial Run at Cunningham and Mercy Parks. 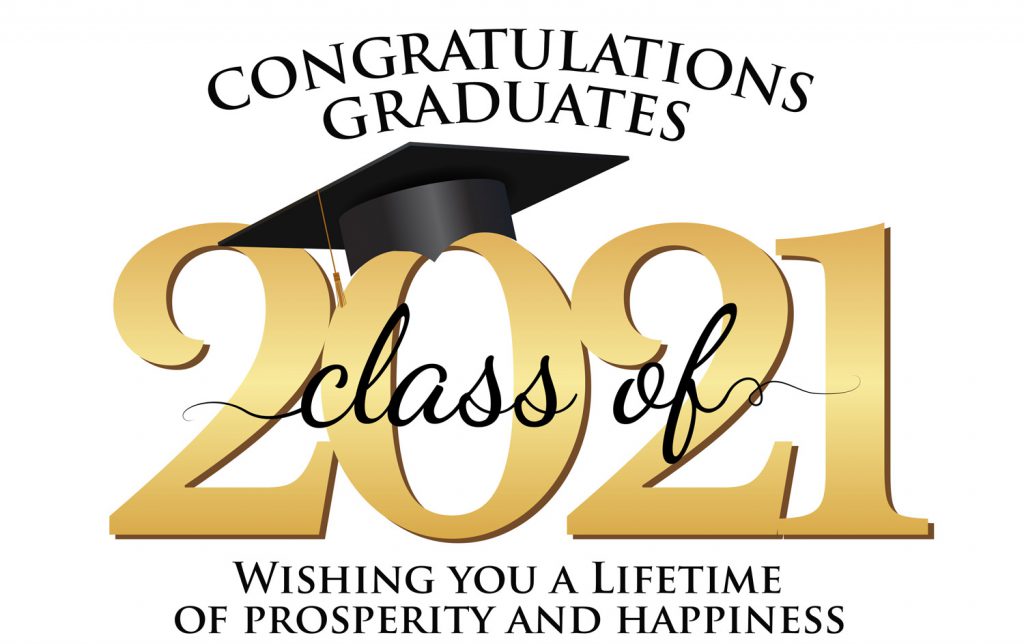