I’m pleased to report my utility bill, Senate Bill 756, was perfected on April 11, and after one more vote of approval, it will head to the House of Representatives for their consideration. This legislation will benefit utility companies and consumers alike through grid modernization efforts, affordable energy rates, quicker outage support and other utility measures.

On April 12, I presented Senate Bill 921 to the Senate Insurance and Banking Committee. This complex bill puts a plan in place to increase transparency and oversight of pharmacy benefits managers (PBM). One of these entities sold for about $65 billion in recent years, so requiring transparency of their transactions is necessary. If enacted, PBMs utilized by the Missouri Consolidated Health Plan (MCHP) will be required to report the aggregate dollar amount of rebates collected and how the rebates have been dispersed to the MCHP. On April 14, I presented my child protection proposal, Senate Bill 823, to the House Special Committee on Public Safety, and my Senate Concurrent Resolutions 28 and 34 will be heard by the House Veterans Committee on April 19.

Communities will “Purple Up” on April 19 to celebrate and support the children of our country’s military. In recognition, the Capitol dome will be lit purple to show our solidarity. Although the military member signs up, the entire family actually serves. Military children experience unique challenges, such as lengthy separation from a deployed parent, anxiety about the parent’s safety and frequent uprooting from their homes when a parent changes posts. In August, Missouri will launch a Purple Star School Program to showcase schools which positively impact the lives of our military children. 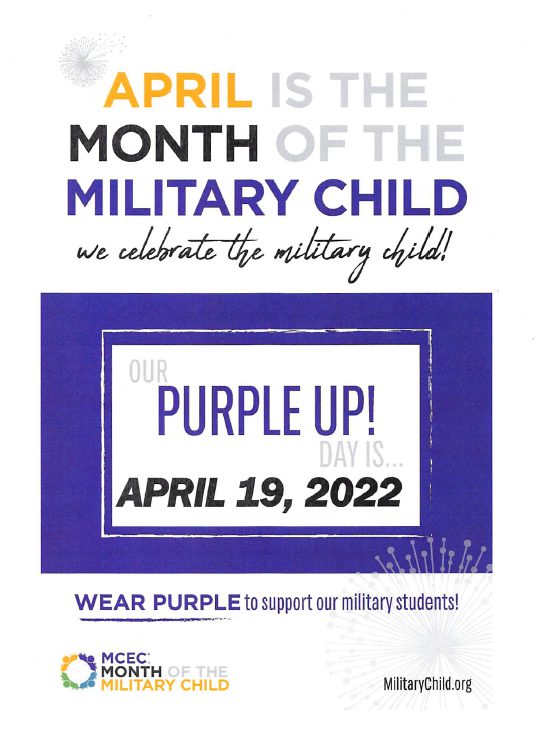 On April 28, a ceremony will take place commemorating Crime Victims’ Rights Week on the south lawn of the Capitol at noon. This year’s ceremony will focus on helping crime survivors find their justice, expanding access to services and ensuring equity and inclusion for all victims.

Work with Us in Work Zones

This is Work Zone Awareness Week, and MODOT is urging drivers to “Work with Us” while driving through work zones. Following a rise in work zone related crashes in 2021, MODOT is calling on all drivers to reverse this trend in 2022 by checking the MODOT Traveler Map and following their Show-Me Zero safety plan: buckle up, phone down, slow down and drive sober.

On April 8, I presented a resolution to Ms. Laurel Rosenthal, the principal at Mark Twain Elementary School in Carthage, who is retiring after 55 years of service. No stranger to awards and accolades, Ms. Rosenthal was the first recipient of the Excellence in Education Golden Apple award from the Jasper County Republican Women’s Committee. She was also given a flag flown in her honor at the Capitol, and her students serenaded her with a special song. 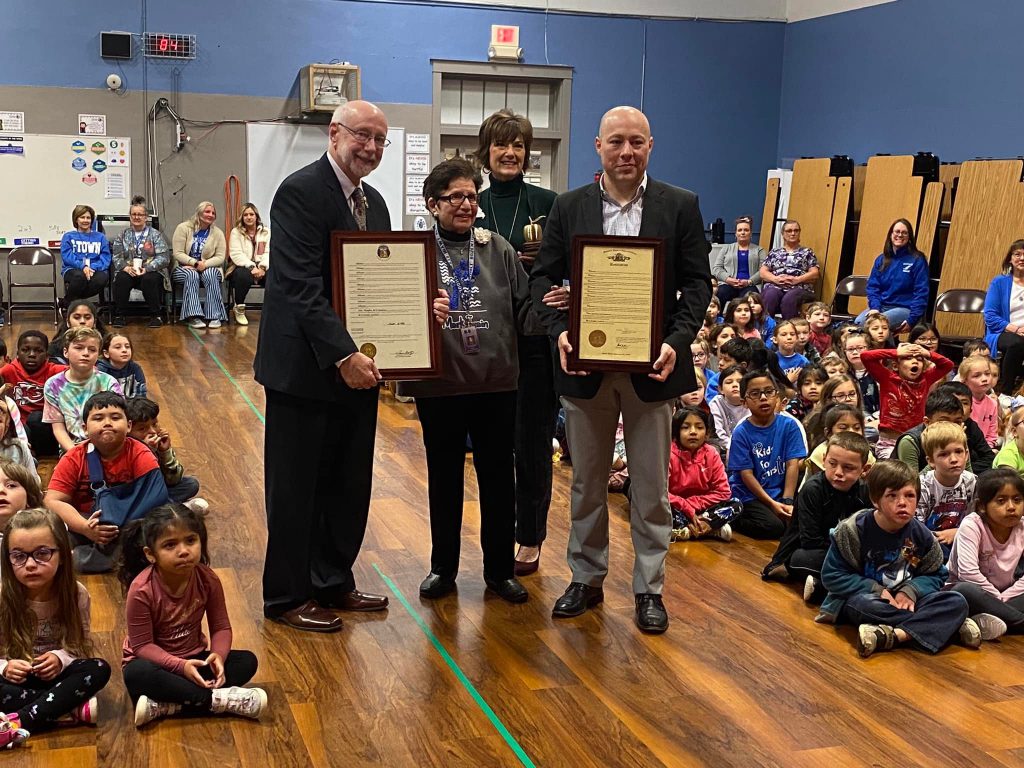 The highlight of my week is meeting with the members of our community who journey to Jefferson City to participate in the legislative process. The last day I am able to introduce guests in the Senate chamber is April 28, so please plan accordingly if you are making the trek to the Capitol. 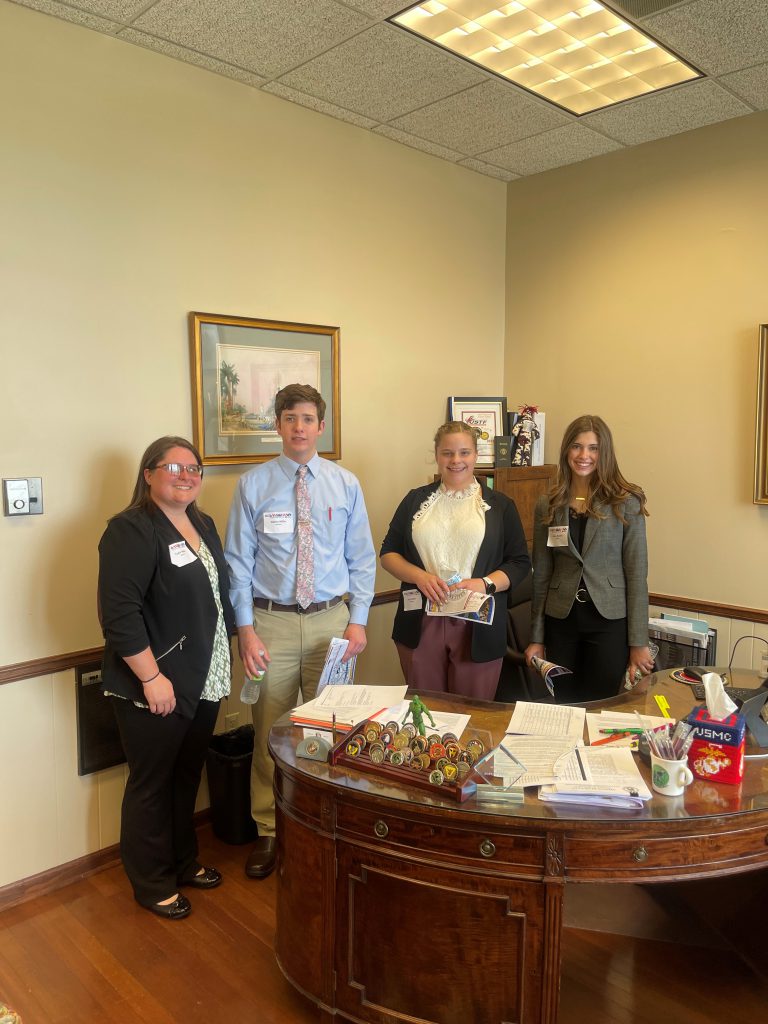 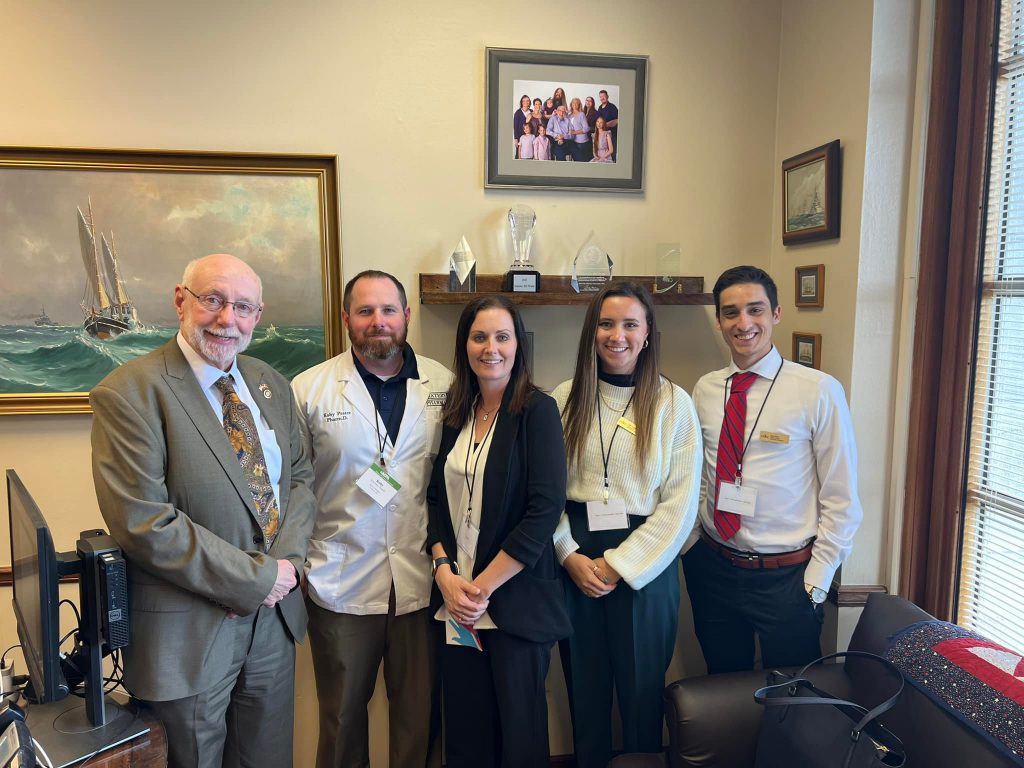 Senator White visits with Koby and Abby Prater, Kelen Caskey and Mark Allred following his presentation to the Missouri Pharmacy Association during their Legislative Day on April 6. Koby and Abby own and operate Prater’s Pharmacy in Webb City, Seneca and Sarcoxie. 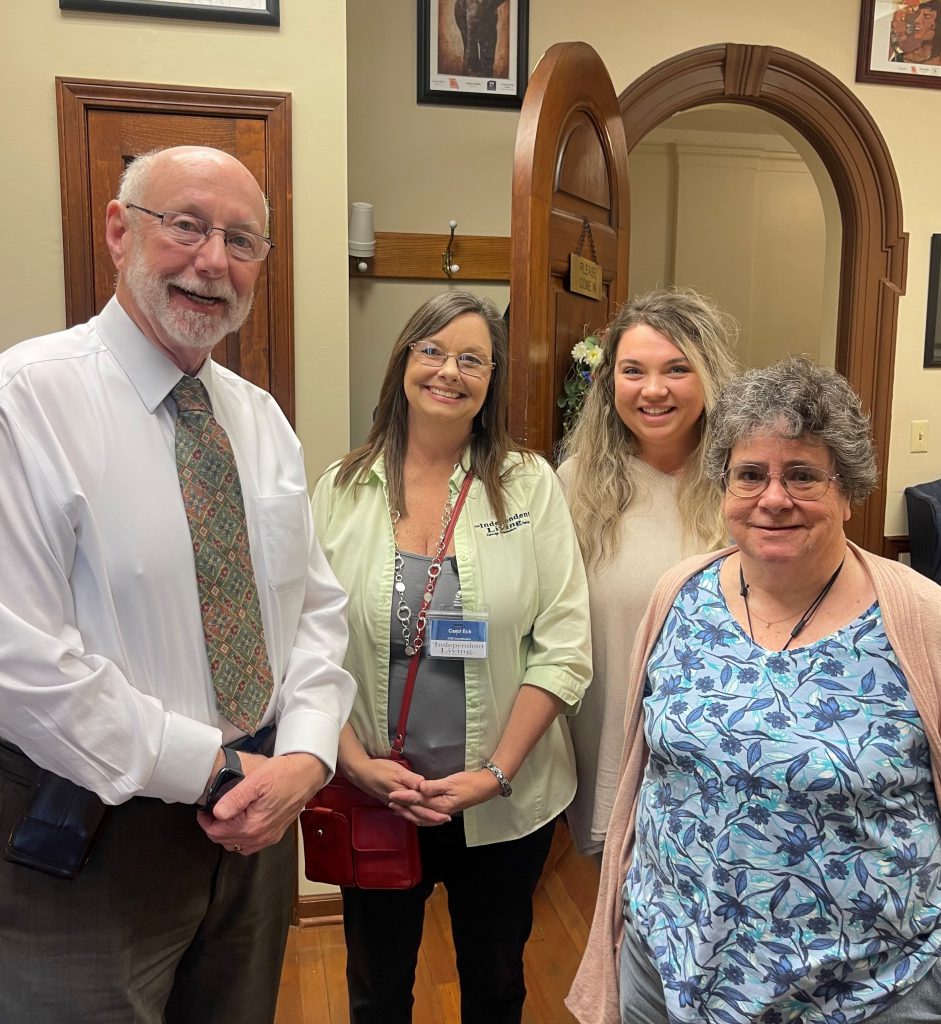 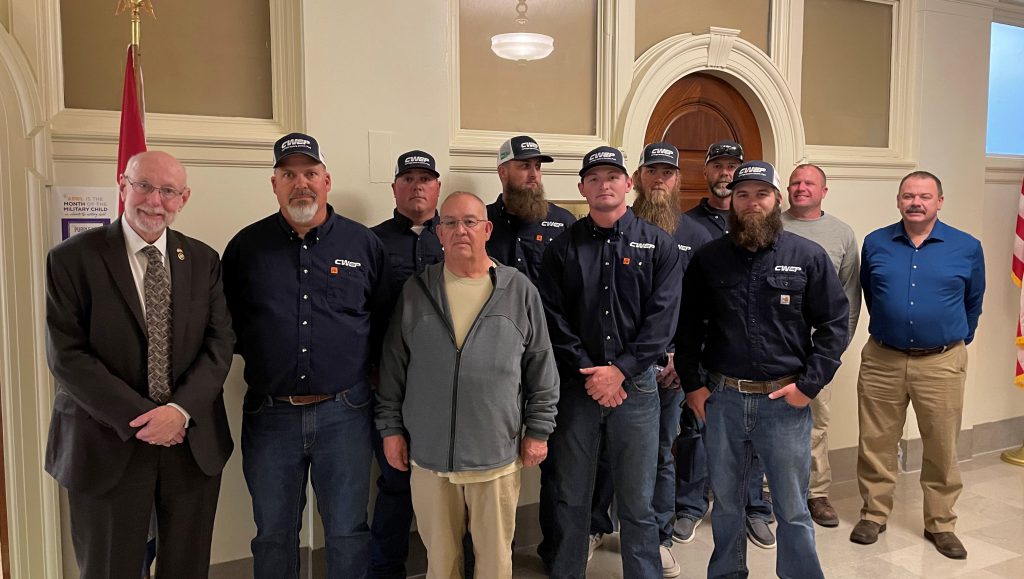 Senator White joins linemen from the Carthage Water and Electric Plant during their advocacy day at the Capitol. 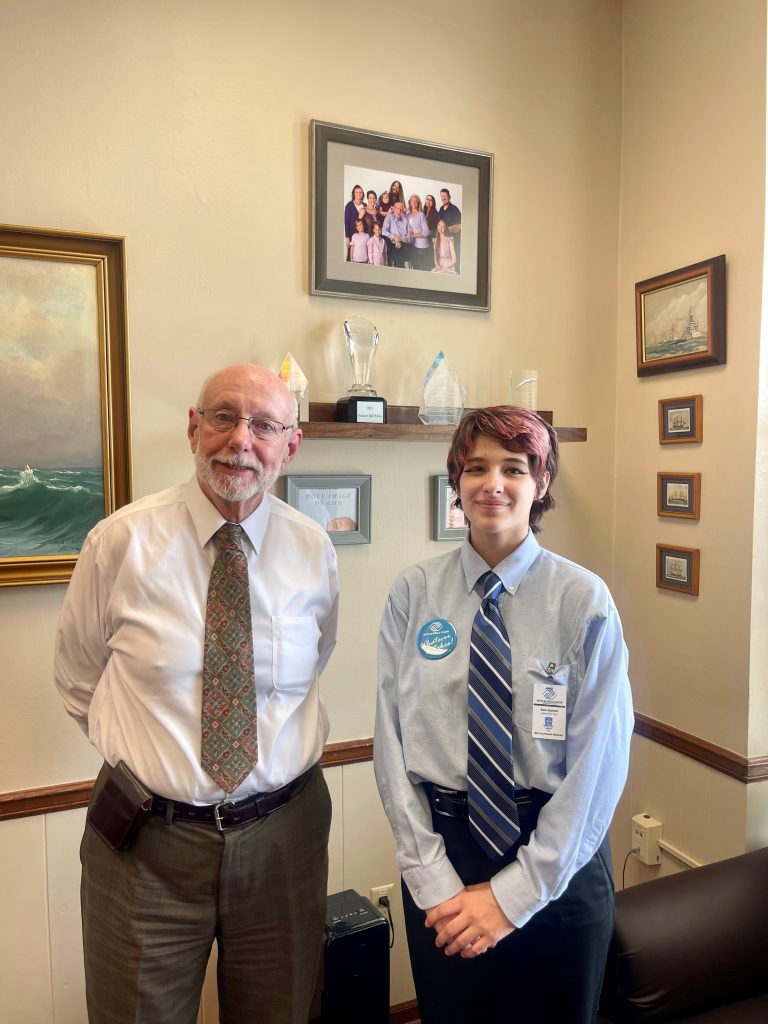 Senator White congratulates Samantha Jasinski for being named the 2022 Youth of the Year by the Boys and Girls Club of Southwest Missouri in Joplin. The winners of the statewide competition on April 13 will advance to the national championship. 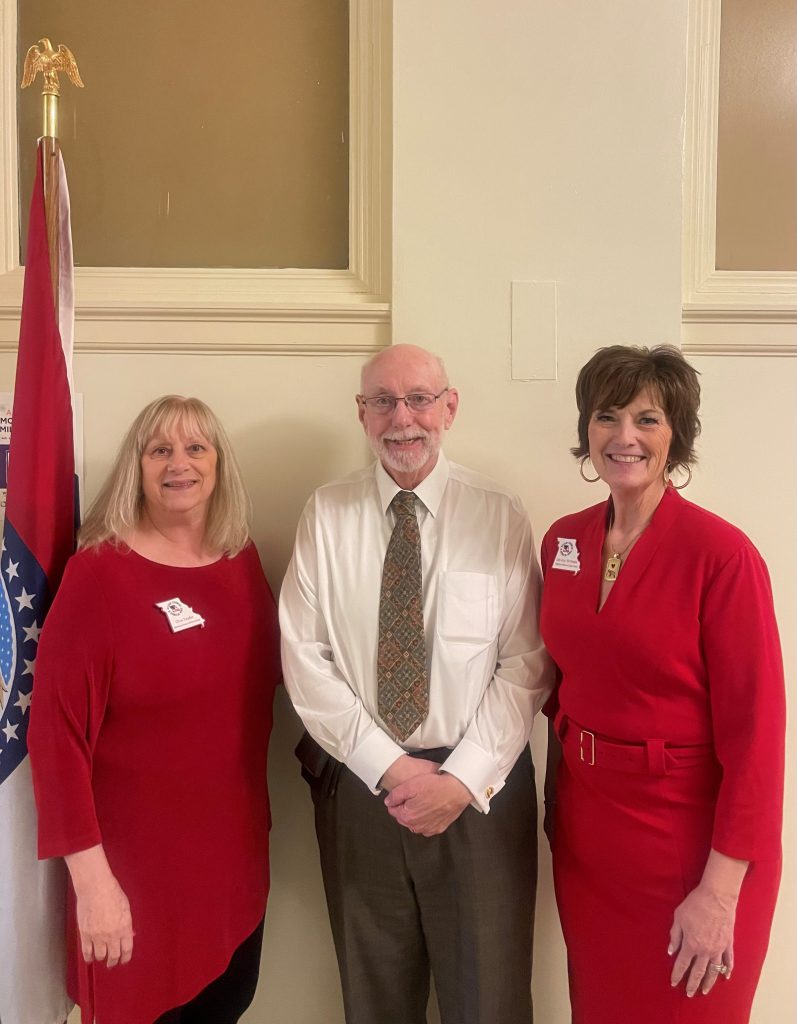