The 2022 legislative session came to an early close in the Missouri Senate on May 12. Despite ending a day early, the Senate managed to pass a number of important bills.

For instance, Senate Bill 775 makes several updates to the state’s Sexual Assault Survivors Bill of Rights. The legislation passed by the General Assembly offers additional protections to victims, including a prohibition against prosecutors prying into the sexual history of witnesses in assault cases.

Senate Bill 718 is a higher education bill that also won passage out of the General Assembly. Among other provisions, the bill designates the third week of September of every year as “Historically Black College and University Week” in Missouri. This legislation recognizes the important role our HBCUs, such as Harris-Stowe State University, play in educating the next generation of Missourians.

The last bill the Missouri Senate passed this session was House Bill 2909, which establishes new congressional districts for the next decade. This issue has been bogged down in the Senate since the start of session and has prompted countless filibusters. I’m glad to see this issue finally resolved and the General Assembly to have completed its work on it.

Be on the lookout for the annual End of Session report in the coming weeks.

This week, I participated in the conference committee where members of both the House and the Senate discussed Senate Bill 710, a wide ranging health care bill. The bill includes what is known as “Will’s Law,” which requires schools to develop individualized health care plans for students with epilepsy or a seizure disorder. Senate Bill 710 also includes the Compassionate Care Visitation Act, which establishes certain visitation rights for individuals in hospitals, hospice care or long-term care facilities. It also designates the week of April 11 through April 17 of each year as “Black Maternal Health Week.” Senate Bill 710 was ultimately passed by the General Assembly and now heads to the governor’s office for further consideration.

On May 12, the House of Representatives granted final passage to legislation that would impose a photo voter identification requirement, grant the secretary of state the power to withhold state funding from local election officials and eliminate Missouri’s presidential primary election, among other provisions. The bill now goes to the governor’s desk for his consideration.

House Bill 1878 would also create a two-week period prior to an election in which Missourians could cast an absentee ballot without offering an excuse. Under existing law, voters must have a statutorily authorized reason for why they can’t vote in person on Election Day in order to vote absentee.

On May 12, the House of Representatives granted final passage to legislation that would increase state funding for charter schools without taking resources from the Kansas City and St. Louis school districts. The Senate previously voted in favor of the measure, which now goes to the governor.

The final version of House Bill 1552 calls for adjusting the statutory formula for distributing state funding to local schools so that charter schools would receive additional funding without reducing the amount of money going to the local districts. The plan, the result of a compromise reached in the Senate, would cost about $62 million in additional funding for the upcoming fiscal year. As originally proposed, the bill would have redirected millions of dollars in state funding from the Kansas City and St. Louis school districts to the charter schools in their jurisdictions.

Charter schools are public schools that operate independently of their local school district and are exempt from many state education regulations. At present, they are allowed to operate only in Kansas City and St. Louis.

HB 1552 also includes reforms to how charter schools operate, such as requiring they be run by a nonprofit entity and a mandate that only Missouri residents can be charter school board members. In addition, the bill also updates the rules for operating online virtual schools.

On a bipartisan vote of 60-81, the House of Representatives rejected legislation that sought to restrict teaching about how race and racism is discussed in public schools. House Joint Resolution 110 proposed adding a so-called “Parents’ Bill of Rights” to the Missouri Constitution. Supporters said it would protect the ability of parents to direct their child’s education and object to the teaching of ideas they find objectionable. Opponents said it was a thinly veiled attempt to eliminate teaching about unpleasant aspects of American history and society and empower some individual parents to dictate what all children are taught.

Supporters of separate initiative petitions to legalize recreational marijuana in Missouri and create a system of ranked-choice voting for state and federal elections turned in signatures by the May 8 deadline in hopes of getting their proposals on the Nov. 8 statewide ballot. The Missouri Secretary of State’s Office must now verify that each petition has sufficient signatures to go before voters.

The recreational marijuana measure follows up on a successful 2019 initiative petition that legalized pot for medical use. In addition to legalizing recreational marijuana use for those age 21 and over, it also would automatically expunge past convictions for marijuana-related crimes – other than driving under the influence – for non-violent offenders.

Under the elections initiative, candidates for the state Legislature, statewide executive branch office or Congress would appear on the same primary ballot without regard to party, with the top four candidates advancing to the general election. During that election, voters could vote for multiple candidates, ranking who they like best in order of preference. If no candidate received a majority on the first tabulation, the candidate with the fewest votes would be eliminated and their votes redistributed among the other candidates based on each voter’s preference. That process would continue until a winner emerged.

The signature verification process typically takes months, but there is an expedited process the secretary of state can use to get it done it couple weeks. If that process is used, it’s possible the petitions could be verified in time for the governor to exercise his authority to move one or both measures to the Aug. 2 primary ballot.

The City of St. Louis Department of Personnel will be hosting a job fair on Saturday, May 21, from 10 a.m. to 2 p.m. The job fair will be held at Friendly Temple Church Youth Worship Center, 5544 Martin Luther King. Jr. Drive, St. Louis, MO 63112. There are immediate career openings with the City of St. Louis, and during the job fair, individuals can meet with department representatives to learn more.

The Department of Economic Development (DED) is now hiring for grant-funded positions to support initiatives through the American Rescue Plan Act (ARPA).

New staff members are needed for the operation of several initiatives, including grant programs for businesses, nonprofits, community development, broadband infrastructure and more. DED expects to hire more than a dozen ARPA-funded roles throughout the rest of Fiscal Year 2022 and additional roles in Fiscal Year 2023. These positions will assist in building programs, providing technical assistance and ensuring efficient deployment of funds.

Positions will be located in Jefferson City, with potential for other locations across the state for some roles.

All who are interested are encouraged to view available positions and apply online at mocareers.mo.gov. Details on planned investments using ARPA funds are available at ded.mo.gov/arpa. For more information on DED, visit ded.mo.gov.

Find Employment with the State of Missouri

Interested in working for the state? Missouri has numerous career opportunities available for those interested. By visiting mocareers.mo.gov, interested applicants can search by agency or position or location. This week, I would like to highlight opportunities with the Missouri Department of Mental (DMH). Previously, I worked with individuals with disabilities as a DMH employee for six years, and it was rewarding work. If you enjoy working with others, this may be a good fit for you. To learn more about the department, please visit dmh.mo.gov.

Please join me as I will be traveling throughout the district during the month of May. We’ve already had two successful town halls, and we are looking forward to the next three. Please come and attend the meeting in your area. 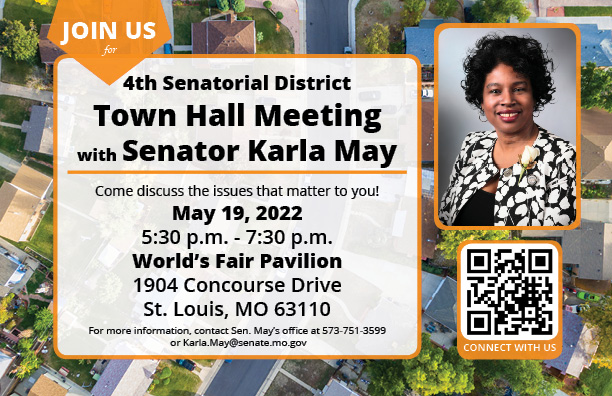 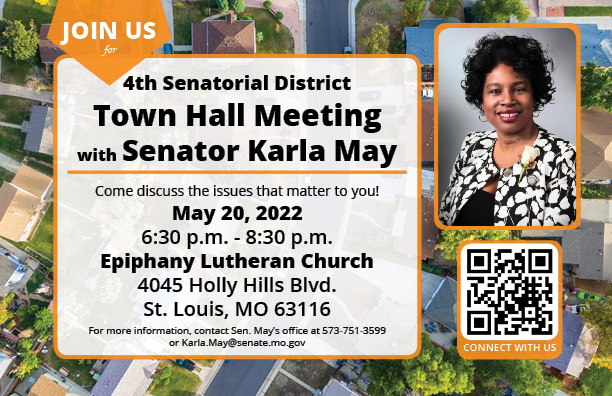 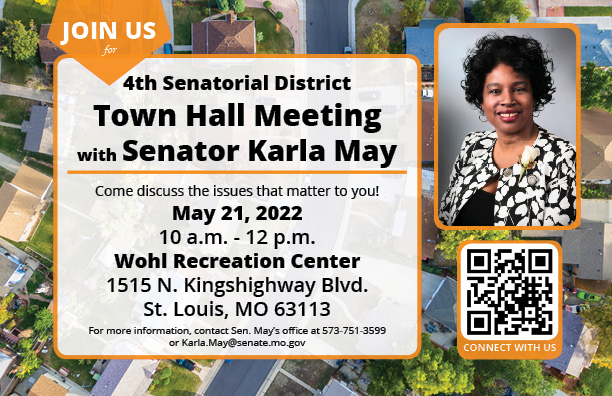