The 2022 legislative session officially ended on May 13. This session was at times tumultuous, but I believe we did pass some legislation to help Missourians. Throughout the course of session, we also started discussions on important topics that I am looking forward to debating next year. 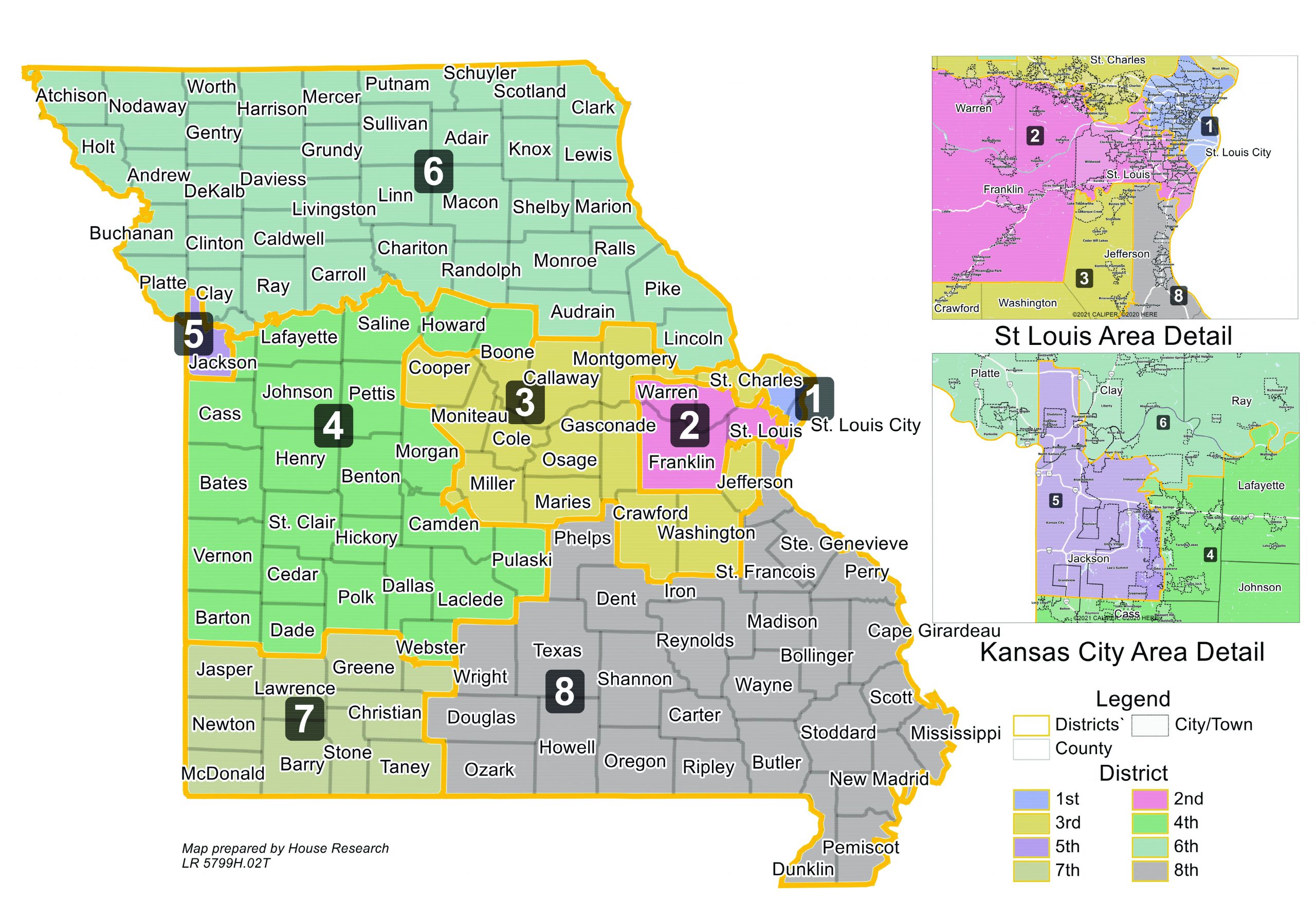 Every ten years after the census results are collected, it’s the General Assembly’s responsibility to draw and pass a new Congressional Map. When we draw these new boundaries, we take into account compactness and keeping communities of interest together, while also drawing a map that represents our state’s population.

It was important to me that we pass a strong map that reflects Missouri’s conservative views, and I believe we achieved that goal, especially for our congressional district. I worked with several of my fellow senators on this issue, drawing hundreds of maps and working through concerns anyone had about a specific version. This map is the culmination of hundreds of hours of hard work by many individuals. Not everyone is going to be 100% satisfied with the map we approved, but that is the nature of a compromise, and I believe we passed a good map. Our state’s current congressional delegation is 6 Republicans and 2 Democrats, and I believe this map will continue to maintain Missouri’s strong, commonsense conservative views in Washington, D.C. The governor signed this bill into law on May 18.

During each legislative session, the General Assembly has one constitutionally required task, passing a balanced state operating budget to fund the state’s various departments and agencies. I want to be a good steward of your tax dollars which is why I’m committed to making sure they are spent wisely. The state operating budget reflects our state’s priorities. This year’s budget is roughly $45 billion, significantly larger than last year’s $35 billion budget. However, this increase is largely due to the federal funds our state received this year. With that in mind, I want to highlight a few key funding items in this year’s budget.

We once again fully funded the foundation formula for our K-12 public schools. This funding is critically important to ensure our students have the resources and supplies they need to succeed in the classroom and beyond. Additionally, the budget provides a $214 million increase in school transportation funding. Ensuring students get to school safely is an important component of maintaining our schools, and I’m glad we were able to increase this crucial funding.

Finally, we were successful in appropriating $0 for facilities that perform abortions, such as Planned Parenthood. Your tax dollars should not be used to pay for abortions or fund any such facility, and I am glad we were able to take this big step forward in protecting life in Missouri.

This year, one of my Senate colleagues filed Senate Bill 781, which establishes the “Save Women’s Sports Act.” This bill would require that no athletic team or sport designated for females, women or girls be open to students of the male sex, as assigned at birth, and any public or private middle school, high school or higher education institution that allows biological males, as assigned at birth, to play women’s sports will not be eligible to receive public funds.

I am worried about the effects this trend will have on other female athletes. Sports are often about more than fun and comradery. For high school students, college scholarships are at stake and are often dependent on athletic performance. For college students, their focus may be on playing in a professional league after graduation. Simply put, allowing transgender athletes to compete in women’s sports is unfair and could cost female athletes significant professional and financial opportunities. I believe the future of women’s sports is uncertain if we continue to allow transgender athletes to compete, and I am committed to doing everything I can to protect the rights of female athletes to compete fairly in sports. I believe this legislation is a great first step, and while it did not pass this year, I will continue to work next year to get it passed.

Critical Race Theory (CRT) is an academic theory that aims to center slavery as the beginning of our country’s history, and more alarmingly, declare that slavery has influenced and molded every aspect of our country. This leads to the baffling conclusion that every institution and system in the United States, including government, is inherently racist, and that by simply living in this country, we are complicit in upholding these racist systems.

As a member of Joint Committee on Education, it was alarming to hear from parents, teachers and advocates who are deeply concerned about the effects CRT will have on our children and our public schools. In part, this is why I filed Senate Bill 645, which establishes the “Let Them Learn Act.” This legislation prohibits K-12 public schools from teaching divisive and racially-charged concepts. I strongly believe our curriculum should be comprehensive and well-balanced. This legislation is about ensuring there is accountability and transparency at the local level regarding what is being taught in classrooms. Under this legislation, each local school board would be responsible for approving and adopting curriculum used by their school district. This also requires all curriculum be available for free.

As a parent, I understand the importance of being actively involved in your child’s education. Parents should have the ability to determine what is appropriate and what is not when it comes to what their child is learning in the classroom. Parents deserve the opportunity to voice their concerns with their local school board members, and let them have the final say on curriculum, not bureaucrats in Jefferson City. While this legislation did not pass, I look forward to filing this legislation again next session and working to combat this politically-motivated movement.

I am proud to say the Missouri General Assembly passed House Bill 1878 to further secure our state’s elections. This legislation requires voters to show a government-issued photo ID in order to vote and ensures that voting machines are “air-gapped,” meaning they are not connected to the internet to prevent hacking. This bill also limits the type of in-kind donations election authorities can receive in order to prevent “Zuckerbucks” from being donated to election authorities and allowing private organizations to influence our elections. While our state did not have the same problems with our elections as other states, I still believe it was important to make these adjustments to ensure we do not encounter issues in the future.