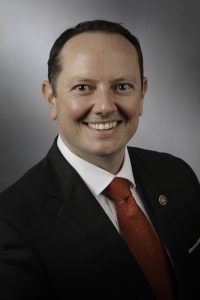 Senator Eric Burlison, a Republican, represents the 20th Senatorial District, comprising of Christian County and part of Greene County. He was elected to the Missouri Senate in 2018. Before his election to the Senate, he represented the 133rd District in the Missouri House of Representatives. In the House, he was named the Missouri Republican Assembly’s Legislator of the Year in 2011, received a 100 percent conservative ranking from the American Conservatives Union and was named the Business Advocate of the Year by the Springfield Business Journal in 2016.

Senator Burlison is a sixth-generation Missourian and is passionate about strengthening communities and neighborhoods in the Ozarks. His dedication to serving others in his community is evident through his work with the Big Brothers and Big Sisters of the Ozarks where he was named Big Brother of the Year in 2005. He also formerly served on the board of D.R.E.A.M. and the Harmony House.

Senator Burlison is a 1995 graduate from Parkview High School in Springfield, and he received a Bachelor of Arts in Philosophy and a Master of Business Administration from Missouri State University. Senator Burlison works as an Investment Advisor Representative with Wealthcare, LLC. In addition, Eric is a Tax Planner and Retirement Designer with American Tax Strategies, LLC, and he also works as a Process Architect at Cerner, Inc., an international health care technology company.

In his free time, Sen. Burlison enjoys hunting and fishing in the Ozarks. He and his wife, Angie, are active members of the Destiny Church in Republic, MO. They live in Battlefield with their two daughters, Reese and Aubrey.