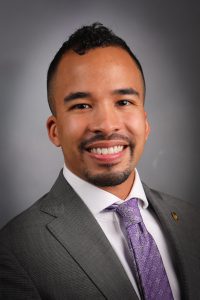 Senator Steven Roberts was sworn into office on Jan. 6, 2021, to serve the people of the 5th Senatorial District and selected as the Democratic Whip for the Minority Caucus. He previously served two terms in the Missouri House of Representatives, from 2017 to 2020. While in the House, he was selected by his colleagues to serve as Chairman of the Missouri Legislative Black Caucus.

Senator Roberts is a fourth-generation St. Louis native, whose parents and grandparents overcame segregation and discrimination to establish their careers. His mother, Dr. Eva Frazer, became a distinguished doctor and his father a respected attorney, St. Louis alderman and successful businessman. It is from his parents that he developed a strong sense of civic responsibility and social justice.

Senator Roberts holds a Bachelor of Science in Psychology and Communication Studies from the University of Miami and received his law degree from Pepperdine University School of Law. While in law school, his experiences included working in the U.S. Congress as a legislative intern; as a certified law clerk with the District Attorney’s Office in the City of Compton, California; assisting the Counsel to Secure Justice in New Delhi, India, to help victims of violent sexual assault; and in his final semester, he worked with a clinic in downtown Los Angeles helping refugees fleeing persecution in their country obtain asylum in the United States. After graduating law school, he joined AP Wireless Infrastructure Partners, LLC as a member of a team of attorneys responsible for managing over $200 million of company assets. Following the events in Ferguson, Sen. Roberts returned to serve his community as a prosecutor for the City of St. Louis where he participated in over a hundred cases from minor weapons offenses to homicides.

In addition to his legislative duties, Sen. Roberts serves as a Captain with the Missouri Air National Guard in the JAG Corps. He graduated from the United States Air Force’s Judge Advocate Staff Officer Course (JASOC) and was selected as the Senior Ranking Officer for the entire JASOC class of approximately 50 attorneys. The JAG Corps is an elite group of law professionals who provide a full range of legal services to the U.S. Air Force, the U.S. Space Force, airmen and guardians. He is also the managing partner of Roberts Law, LLC.

Senator Roberts is a member of the Missouri Bar and U.S. District Court for the Eastern District of Missouri, Mound City Bar Association and a founder and former president of the St. Louis chapter of the National Black Prosecutor’s Association. He was recognized in 2021 by the Judicial Conference of Missouri, an organization of all the state’s judges, for his efforts to protect and promote a fair, efficient and independent judiciary.

Senator Roberts currently resides in the City of St. Louis.