A March through Missouri’s Milestones

A March through Missouri’s Milestones

March is a rollercoaster of beautiful days interspersed with bitter cold weather, of wearing a heavy coat as you say hello to spring and of new life blooming while Old Man Winter sneers. Much like the history of our state, March has the tendency to roar like a lion at times, bleat like a lamb during others or do both simultaneously. As we enter the spring season and enjoy longer days and warmer temperatures, let’s march through some of the ups and downs of Missouri’s historical milestones.

We’ll start with the actions leading up to our state’s admittance into the Union. In 1803, the United States entered an agreement with France to complete the Louisiana Purchase, doubling our state’s population. Seventeen years later, on March 6, 1820, the Missouri Compromise was established, allowing us to enter the Union as a slave state with the stipulation Maine entered as a free state. Missouri’s size would increase again when the state annexed the northwestern corner with the Platte Purchase on March 28, 1837. Prohibited from expanding our state by provisions in the Missouri Compromise, the General Assembly petitioned Congress to acquire the land, and it finally came to fruition with treaties with multiple Native American tribes. Despite some of these darker days in our history, Missouri has continued to change and adapt for the better.

One positive change was incorporating the State Historical Society of Missouri (SHSMO) on March 9, 1899. The website, shsmo.org, offers a variety of virtual tours, exhibitions and on-demand programs on various topics, demonstrating both the progress our state has made over the past century, as well as Missourian’s love of history. One of the exhibits that begins March 11 is MOda: Missouri Style Makers, Merchants and Memories, which highlights the evolution of Missouri style and the role the apparel industry has played in our state’s economic development.

Fourteen years later on March 22, 1913, Missouri adopted our official state flag. Designed by Marie Oliver and adopted by the General Assembly after three years of attempts, our flag’s three horizontal stripes match the national colors of red, white and blue. Our coat of arms is centered over the stripes, and it is encircled with 24 stars, signifying our state’s admittance into the Union as the 24th state. If you have a special occasion or milestone of your own to mark, contact your representative to request a Missouri flag that has been flown over the Capitol! 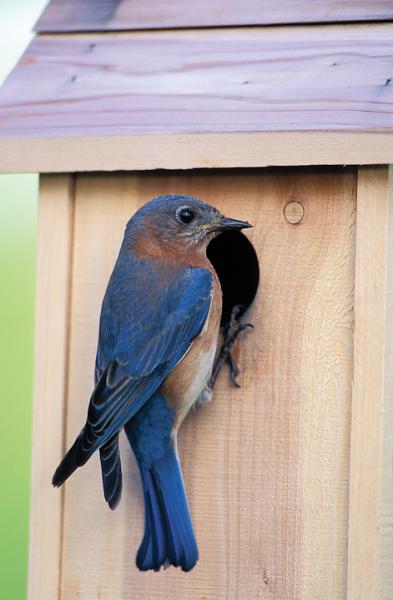 Fourteen years after our flag was adopted, the General Assembly passed legislation on March 30, 1927, designating the bluebird as our official state bird as a symbol of happiness. This beautiful, Missouri native offers many appealing characteristics with its pleasing “cheer-cheeryup” song, nonaggressive demeanor and brilliant color. The Missouri Department of Conservation has a great variety of information on its website on attracting blue birds and building nest boxes. Since bluebirds don’t eat seeds, you’ll need to feed them with a mixture of corn meal, grease and dried fruits to supplement their insect-rich diet. March is a busy month for our state’s flying beauty, as they construct or find a nest to lay their eggs. If you want to naturally attract bluebirds to your yard, plant a berry producing tree, like junipers, dogwoods, sumacs, hollies and elderberries.

Although the bluebird enjoys the top billing in our state, Missouri’s skies, trees and shrubs are home to more than 400 species of our winged friends. Formerly known as the Audubon Society of Missouri, the Missouri Birding Society (MBS), found at mobirds.org, helps every day Missourians with education and appreciation of the natural world. From viewing issues of The Bluebird quarterly journal, to looking up birding sites in Jasper County to subscribing to the MOBIRDS list serve, this is a great place to start a new ornithological hobby.

The MBS “Questions from Beginning Birders” suggests partnering with an experienced birder to know where and how to find birds, investing in a pair of binoculars and purchasing an up-to-date field guide. If you are just curious about the birds you see outside your window, you can scroll through the species list to see a photo of the bird, learn which season you are most likely to see it and how abundant they are in the specific area. Some birding hotspots in our community are Carl Junction Access, Kellogg Lake, Stone Corners Access, Wah-Sha-She Prairie and the Webb City Park.

Enjoy the tumultuous month of March. I hope you will venture out to a birding site, or simply look out your window, to view one of Missouri’s most spectacular air shows.

This column appeared in the Joplin Globe’s Better Living publication on March 4, 2022.