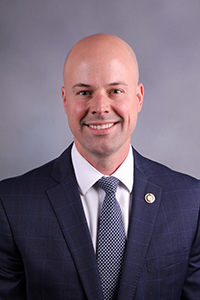 Tony Luetkemeyer is the State Senator for the 34th Senatorial District, representing Buchanan and Platte Counties. Sen. Luetkemeyer was elected to the Missouri Senate on November 6, 2018 and re-elected to a second term on November 8, 2022.

Sen. Luetkemeyer was born and raised in Missouri. A fifth-generation Missourian, Sen. Luetkemeyer grew up in a small farming community in Southeast Missouri and was proudly educated in the local public schools. His father, a career civil servant in the U.S. Department of Agriculture, and his mother, a nurse, were strong influences who taught Sen. Luetkemeyer and his two sisters the importance of serving others and giving back to their communities.

After graduating from high school, Sen. Luetkemeyer attended the University of Missouri in Columbia. During his junior year, he was elected Mizzou’s student body president. In that role, he advocated for students at MU to ensure their voices were heard by university administrators. It was also while campaigning for office that Sen. Luetkemeyer met his wife, Lucinda

During the summer after college, Sen. Luetkemeyer worked as a White House intern in the Domestic Policy Council under President George W. Bush. The expertise and commitment to public service displayed by White House staff showed Sen. Luetkemeyer how individuals could shape public policy at the highest levels of government.

After graduating from law school, Sen. Luetkemeyer clerked for a judge on the Missouri Supreme Court. He understands the importance of limited government and the individual rights and liberties protected by the U.S. Constitution and Bill of Rights. He currently practices law in Kansas City.

In addition to his other committee assignments, Sen. Luetkemeyer serves as the Chairman of the Judiciary Committee, which oversees changes to the state’s civil and criminal justice system. As chairman, Sen. Luetkemeyer passed historic legislation to combat the increase of violent crime. His legislation ended the catch-and-release of murderers and other dangerous felons, ensuring they are off the streets.

Sen. Luetkemeyer is a staunch supporter of law enforcement. He led the effort to push back against attempts by Kansas City to strip over $42M from the Kansas City Police Department budget, ensuring the KCPD’s officers have the resources they need to keep citizens safe. He also sponsored and passed landmark, bipartisan legislation to protect law enforcement officers and their families from harassment, provide increased funding for sheriffs, and give police departments additional tools to recruit and retain officers.

Throughout his time in the senate, Sen. Luetkemeyer has been a steadfast advocate for lowering taxes. He sponsored and passed legislation to protect homeowners from runaway property tax assessments.  He also helped pass the largest income tax cut in state history to keep more money in the pockets of hard-working Missouri families.

Sen. Luetkemeyer and his wife are residents of Parkville. They are active members of the United Methodist Church of the Resurrection. Sen. Luetkemeyer is a member of the St. Joseph Chamber of Commerce, National Rifle Association, Kansas City Metropolitan Bar Association, and Federalist Society. In his spare time, he enjoys traveling, watching sports (particularly the Mizzou Tigers, Kansas City Chiefs and St. Louis Cardinals), and spending time outdoors with his wife and their dog, Truman.

Joint Committee on the Justice System