This week, I returned to my home under the dome in Jefferson City for the annual veto session on Sept. 15. The governor vetoed portions of eleven appropriations measures and four bills passed by the General Assembly during the 2021 legislative session. My colleagues and I decided to forgo overriding his executive decisions, letting his vetoes stand. I would imagine the sponsors of those proposals will consider the governor’s objections and refile the legislation next year.

Preparing for the Bicentennial Inaugural Parade and Ball

The Inaugural Ball is a tradition that normally follows the swearing in ceremony for newly elected legislators and statewide officials in January. In lieu of COVID-19 precautions and the anticipated bicentennial of our statehood, the event was postponed until Sept. 18 to coincide with our Bicentennial Inaugural Parade. The parade will begin near the Capitol and highlight historical markers and people from Missouri’s past, present and future. After the parade concludes, visitors can step inside the Missouri State Museum to enjoy several bicentennial-themed exhibits, sports trophies and other Missouri treasures.

This year’s ball will be a little different than past years. First of all, the dance and Grand March will be outdoors on the north portico and lawn of the Capitol. Another new feature is the addition of a bicentennial fireworks display over the Missouri River. The music will begin after the governor and first lady are introduced and descend the staircase. I cannot think of a better way to wrap-up the 2021 legislative session than a parade, ball and fireworks!

In a letter to the governor dated Sept. 10, a group of 16 senators, including myself, took action to defend Missouri’s private-sector businesses from an executive order issued by the president. The U.S. Department of Labor’s emergency rule requires employers with more than 100 workers to mandate vaccines or weekly COVID-19 testing. The governor has already condemned the constitutionality of the order. My family chose to be vaccinated, and I believe these approved inoculations are a safe, effective way to mitigate the spread of the virus. However, the key word here is “chose,” not forced. This topic will be thoroughly discussed by the Missouri Senate in the near future, and I can assure you, the fight for individual liberty is far from over.

On Sept. 13, the members of the committee I chair, the Interim Committee on Greater St. Louis Regional Emerging Issues, conducted an information-gathering hearing on the campus of Lindenwood University. The invited panel included the mayor of the city of St. Louis, the executive of St. Charles County and a representative from Greater St. Louis Inc., and they each shared insights about the issues St. Louis and the surrounding communities are facing. I will keep you updated on the committee’s findings in future reports.

Little did I know when I tossed my cap in the air following the graduation ceremony at my alma mater 50 years ago that I would return as an inductee to the Bismarck R-5 Hall of Fame. I am humbled by this honor and proud to belong to such a great community and group of people. Go Indians! 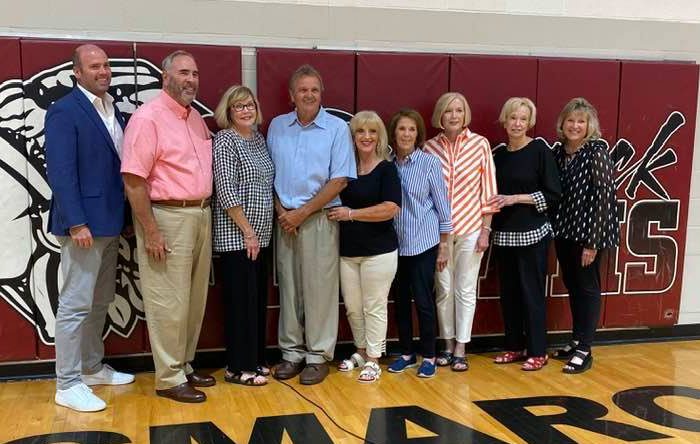 Senator Gannon’s family poses for this photo after her induction into the Bismarck R-5 Hall of Fame.