Visitors at the State Capitol certainly don’t have to look very far to notice how highly Missourians regard and value our veterans. In honor of Veterans Day 2021, I want to share a brief synopsis of how Missouri’s Statehouse salutes our beloved and revered brothers and sisters in arms.

My favorite tribute is the Missouri Veterans Memorial on the north side of the Capitol, dedicated to the men and women who served, are serving or will serve our country. The entrance, guarded by a Spanish cannon captured during the Spanish-American War, has a welcome sign that states, “The memorial design includes many symbolic elements representing the turmoil and sadness of war, and its ultimate goal – peace.” Those who stroll “The Veterans Walk” will pass eight, black granite markers depicting the name and dates of previous wars involving Missourians and a waterfall cascading into a reflective pool with raised letters that spell, “Missouri Veterans – Guardians of Liberty.” The memorial also includes a colonnade facing the river, metal handrails symbolizing the branches of service and a flag plaza to the south, where flags of the United States, Missouri, Prisoners of War/Missing in Action (POW-MIA) and the Missouri Veterans Commission are constantly flown.

The Missouri State Capitol is home to numerous tributes to veterans.

The east end of the Capitol’s first floor is the site of the Missouri Veterans Gallery. The walls are adorned with two murals, Jefferson City’s World War I victory parade and a National Guard training ground from 1916. A brass model of the USS Missouri is the center stage of the gallery, and it’s surrounded by old military weapons, ammunition and uniforms. The gallery also showcases six flags from the different branches of the Armed Forces, a monument that breaks down how many Missouri veterans served in each conflict and an 800-pound bell commissioned in 1944 for use on the USS Missouri.

Several of the lunettes on the Capitol’s second floor paint a picture of Missouri’s first veterans engaged in military conflicts from the start of the American Revolution to the end of WWI. Two of these works are by N.C. Wyeth and portray critical junctures for Missouri during the Civil War. The “Battle of Wilson’s Creek,” depicts a scene from the first battle of the Civil War fought west of the Mississippi River, about ten miles southwest of Springfield on Aug. 10, 1861. Outnumbered by over 6,000 troops, the Union lost its general and the battle to the Confederate army. The other Lunette, “Battle of Westport,” shows a scene from the war’s final clash on Missouri soil near Kansas City in 1864, where Union troops defeated the Confederate soldiers and secured a major political victory for the north. When these paintings debuted in 1921, one former Civil War soldier commented, “I was with Price in that very battle. It was hell.”

The final salute is a community organization, the Missouri Veterans Hall of Fame (MVHoF). Launched in 2020 by a group of committed veterans and individuals, this program honors the outstanding achievements and contributions our veterans have made in their communities and throughout Missouri. President Truman was one of the first to be inducted into this outstanding organization. Visit the MVHoF website and Facebook page to view the Class of 2021 or nominate a deserving veteran for this honor.

I hope all veterans have the opportunity to visit these memorials and witness how indebted Missourians are for their service. Until then, enjoy the day in our community! 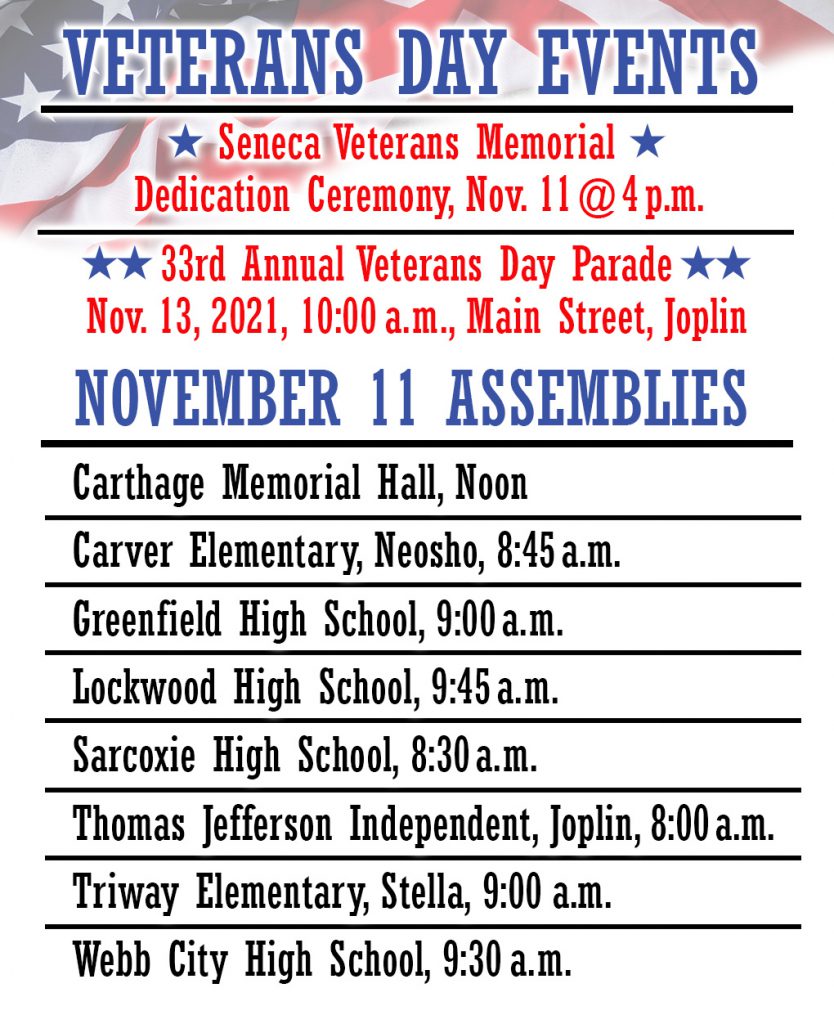