It is hard to believe another year has almost come to a close. It seems like just yesterday I was sitting on stage beside our state’s top leaders and HUD Secretary, Ben Carson, preparing to lead the audience in the Pledge of Allegiance and kick-off the annual Governor’s Prayer Breakfast. As we round the bend toward the holiday season and the start of the 101st General Assembly, I would like to take a look back at some of the legislative milestones reached during this peculiar year.

First of all, I am extremely grateful for the passing of Senate Bill 591. Now law, I believe this legislation will put an end to meritless, civil action lawsuits and unnecessary punitive damages. From presenting it to the Senate Government Reform Committee on Jan. 14, to witnessing the governor sign it into law in Springfield on July 1, it was rewarding to advance the bill through the process and see it become law. My military omnibus bill, Senate Bill 718, was also Truly Agreed and Finally Passed, and five of my other bills were included in the language of passed House bills and two pieces of my legislation landed on final versions of Senate bills.

In addition to these legislative successes, I was honored to be invited to serve on various councils and boards this year. The first occurred last January when I was invited to serve as a fellow and represent Missouri at the National Conference of State Legislatures’ Opioid Policy Fellows Kickoff Meeting in Austin, Texas. In July, I graciously accepted the invitation from the Department of Mental Health to be the legislative liaison for the Missouri Eating Disorders Council. I am also proud to be a part of the Missouri Health Insurance Innovation Task Force as our state begins the process of expanding Medicaid coverage.

Throughout the spring, senators and staff were advised to work remotely as our state worked to navigate the effects of COVID-19. Prior to that, I enjoyed speaking to several advocacy groups in the Capitol Rotunda. On March 2, I spoke to the Missouri Commission for the Deaf and Hard of Hearing about my legislative efforts, and on March 3, I addressed the Missouri State Medical Association’s (MSMA) members during their White Coat Day. How humbling it was to be named their Legislator of the Year later that day and receive the award in the Senate Chamber. I was equally humbled to receive a 2020 Certificate of Appreciation from the U.S. Department of Defense and be named a business champion by the Missouri Chamber of Commerce. 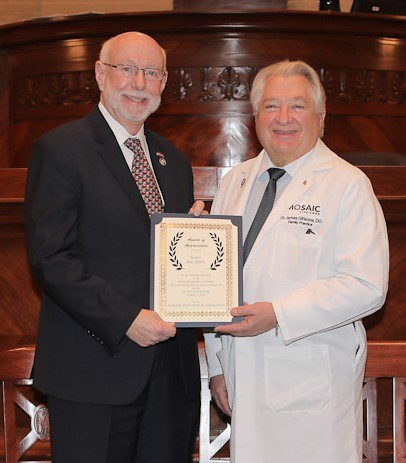 One Team, One Dream

There is no way I could achieve these successes alone. I applaud and appreciate the assistance I receive from my dedicated staff, Mike and Gina, and the guidance I glean from the residents of the 32nd Senatorial District. I hope that you will continue to lend your support and weigh in on issues next year as we tackle new projects and policies in 2021 and beyond.