Sen. Jamilah Nasheed’s Legislative Update for the Week of Jan. 20, 2020

Legislative Actions and Information for the Week of Jan. 20, 2020

It was a short week in the Missouri General Assembly as inclement weather forced an early end to legislative activities. While short, the week was still eventful. Most notably, the General Assembly heard the State of the Judiciary Address. Missouri Supreme Court Chief Justice George W. Draper III delivered the address. He is only the second African American to become the chief justice in Missouri.

In his address, Chief Justice Draper discussed the improvements happening to Missouri’s court system. He talked about how technology is keeping Missouri’s judicial system open and accessible, and about how soon they will be introducing a new system to file fees and other court documents right from your phone. He also acknowledged the work done regarding criminal justice reform, including expungement, which Sen. Nasheed spearheaded last year. Lastly, the chief justice called on lawmakers to increase funding for Missouri’s overworked public defenders. These public servants work tirelessly to ensure justice is done for everyone, including those who cannot afford legal representation, but their massive workloads and lack of support make that difficult to achieve. By increasing funding, the chief justice believes it will alleviate some of the burden on Missouri’s public defenders.

Bills continue to be referred to Senate committees for further consideration. In the coming weeks, Sen. Nasheed’s bills will be heard in their assigned committees.

The most important task the Missouri General Assembly must complete during the legislative session is approving the state’s operating budget for the upcoming fiscal year. The Senate Appropriations Committee plays an important role in helping make that happen. The committee met this week to discuss an overview of the state budget.

Senator Nasheed’s 5th Annual Sex Trafficking Awareness Day in the State Capitol was a success. Despite winter weather conditions earlier in the week, many groups turned out to raise awareness for this important cause. Lawmakers from both sides of the aisle came together to rally support for the continued fight against sex trafficking in Missouri. This was Sen. Nasheed’s last time hosting Sex Trafficking Awareness Day, but this was not a goodbye. Senator Nasheed promises to continue to attend this event in the future. 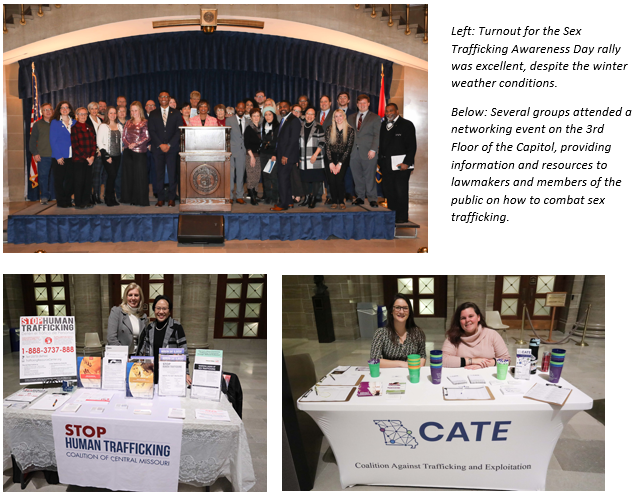 Senator Nasheed Speaks Up For School Choice
On Jan. 22, Senator Nasheed spoke at an event in the State Capitol celebrating School Choice Week. Senator Nasheed discussed the importance of every student having access to a quality education no matter the institution. Senator Nasheed firmly believes no child should be stuck in a failing school. The debate about school choice should not be between public schools and charter schools, but what is best for the child.