Ceres, Missouri’s Goddess of the Dome to Receive Facelift

She stood tall over Missouri’s seat of government for more than 90 years, but on Thursday, Nov. 15, Ceres, the Roman Goddess of Agriculture, came down from her pedestal high atop the State Capitol building in Jefferson City. Hundreds of onlookers braved cold winter winds and snow to watch workers lower the familiar bronze statue from the Capitol dome. 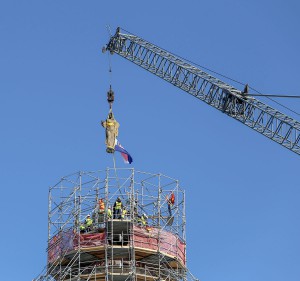 The statue of Ceres was originally installed on Oct. 29, 1924. The intervening years have been hard on the goddess. Lightning strikes marred her skin and weather wreaked her concrete base. As part of a $40 million restoration effort currently underway at the Missouri Capitol, Ceres will travel to Chicago for cleaning and conservation, a process expected to last about one year.

Standing 10 feet, four inches tall and weighing nearly a ton, the statue was created by Iowa-born artist Sherry Fry. Perched nearly 240 feet above the Capitol lawn Ceres holds a bundle of wheat to symbolize the importance of agriculture in Missouri.

Thursday morning, onlookers strained their necks to watch as crane operators lifted a 550-foot tall boom into position and raised the statue from the Capitol’s capstone. Slowly Ceres was lowered to a waiting flatbed truck where she was placed for public viewing. After about two hours in the sunlight, Ceres was loaded in an enclosed trailer and began her journey to Conservation of Sculpture and Objects Studio, where restoration work will take place.

Visitors who traveled to Jefferson City to witness Ceres’ descent were greeted with what was probably an unfamiliar sight. The eastern end of Missouri’s iconic Capitol building is currently surrounded by construction scaffolding, and its dome shrouded in a protective wrap.

The structure was completed in 1917 and is the state’s third Capitol building, built after the previous Capitol was destroyed by fire. Concerns about water infiltration prompted the restoration effort, and much of the work is centered on repairing stonework and preventing future water damage. Workers are now making structural repairs to the northeast side of the Capitol building. As repairs progress, they will work clockwise around the building until the entire façade is readied for another century.

The restoration project began in March and is expected to be completed in time for the next scheduled governor’s inauguration in January 2021.