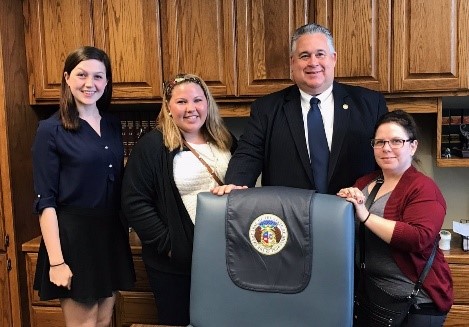 Mary McGinnis, Emily Freedman and Gina Gagnepain visited this week to talk about prison sentences and the age when someone can be tried in court as an adult. They are all students at the University of Missouri-St. Louis and are currently participating in a social work policy class. 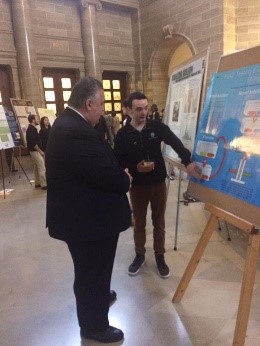 Michael Austin from Arnold visited the State Capitol during the University of Missouri-St. Louis’ “Undergraduate  Research Day.” His presentation was about testing evolved intelligence across multiple contexts. This gentleman has a bright future! 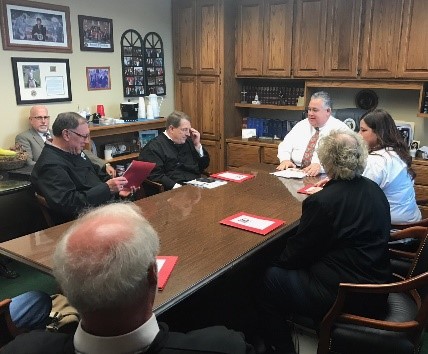 Representatives from the Missouri Restaurant Association visited with me to talk about issues facing their industry. Restaurants provide over 300,000 jobs in Missouri and contribute $10.5 billion toward the Missouri economy.

Legislative Action on the Senate Floor:

SCS for SB 84 – Kraus – This bill would restrict the use of cell site simulator devices.

Senate Bill 434 – Sater — This bill would allow school districts to allocate less than 1 percent but no less than .5 percent of moneys received under the school foundation formula to the professional development committee of the district when certain requirements are met.

Senate Bill 395 – Hoskins — This bill would modify provisions relating to the practice of public accounting.

Bills Debated in the Senate:

The Senate also spent a considerable amount of time debating two pro-life bills that are currently being filibustered by some Senate Democrats. The first bill we debated was Senate Bill 67, which would modify provisions of law relating to abortion, including donation of fetal tissue, tissue reports, abortion reports, employee disclosure policies and abortion facility inspections. We also debated Senate Bill 41 that would provide protection for alternatives-to-abortion agencies.

On April 3, the United States Senate debated and passed S89 that would create an exemption for the Delta Queen so that it can cruise again. This bill passed by a vote of 85-12 and now goes to the United States House of Representatives. If passed and signed by the President, the Delta Queen’s home port will be in Kimmswick, Missouri, produce 170 new jobs and generate around $36 million in tax revenue.

Several weeks ago the Senate brought up House Bill 130 which outlines a regulatory structure for Transportation Network Companies, such as Uber, to operate in Missouri. During this debate, I raised concerns about insurance requirements of TNC drivers as well as a few technical changes that would have increase public safety. I brought forth these concerns and after two days of debate, it became clear that it would take some time to reach an agreement. This week, I completed negotiations with the Senior Senator from St. Charles, and together we reached a compromise. We have agreed to move forward on this piece of legislation.