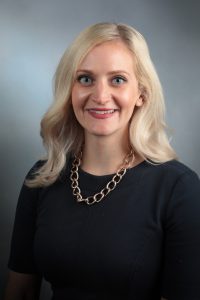 Senator Lauren Arthur was elected to represent the constituents of the 17th Senatorial District in the Missouri Senate during a special election on June 5, 2018.

Prior to her time in the Missouri Senate, Sen. Arthur served four years in the Missouri House of Representatives, where she served as the ranking minority member on the Health and Mental Health Policy Committee, while also serving on the Administration and Accounts and General Laws Committees. During her tenure, Sen. Arthur also served on the Interim Committee on Stabilizing Missouri’s Health Insurance Markets as well as the Legislative Task Force on Dyslexia.

Senator Arthur returned home to Kansas City to join Teach for America. She worked as a middle school teacher. She taught English and Language Arts at Urban Community Leadership Academy, a charter school in the urban core. During that time, Sen. Arthur earned her Masters in Education from the University of Missouri – St. Louis. She also worked as a Project Manager at VML, a global advertising agency headquartered in Kansas City. She now serves as the Regional Director for Urban Leaders Fellowship, a program designed for early to mid-career professionals who are looking to accelerate their leadership abilities through a seven-week fellowship with a focus on policy and practice.

Senator Arthur currently lives in Kansas City, MO. She enjoys spending time with her husband, Russell, and their dog, Odie.

Board and Commissions Initiative