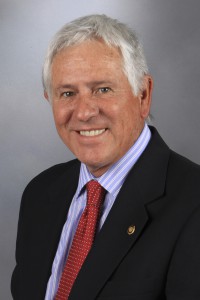 Senator Sater is a native of Barry County where he owned and operated Sater Pharmacy for almost thirty years. He is a 1972 graduate of the University Missouri – Kansas City School of Pharmacy and earned his BS in Biology/Chemistry from Missouri State University in Springfield. Senator Sater and his wife, Sharon, reside in Cassville, MO. They have two children, Joshua and Samantha.

Senator Sater is a member of First Baptist Church of Cassville, Cassville Chamber of Commerce, County Disabled Fund of Barry County Board of Directors, Missouri Pharmaceutical Association, Security Bank of Southwest Missouri Board of Directors. He has served as President of the American Cancer Society and has participated in two, three-week medical mission trips to Honduras to provide medical assistance. David and his wife, Sharon, are co-founders of the pro-life Pregnancy Resource Center in Aurora, MO.